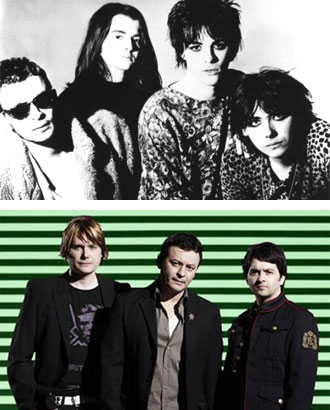 Above: The classic four-piece lineup from early 1990s.
Below: The Power Trio formation, post-Edwards's disappearance.
Influences:
"I wanted to rub the human face in its own vomit and force it to look in the mirror."
— JG Ballard, as sampled in "Mausoleum"
Advertisement:

The Manic Street Preachers are a Welsh Alternative Rock band consisting of guitarist/vocalist James Dean Bradfield, bassist Nicky Wire and drummer Sean Moore. A fourth member, guitarist/songwriternote He was credited as the rhythm guitarist on the band's first four albums, but only played on two songs; "La Tristesse Durera (Scream To A Sigh)" from Gold Against the Soul, and "No Surface All Feeling" from Everything Must Go. Richey James Edwards, disappeared in 1995, and is believed to have committed suicide.

The band was founded in 1986 as a Clash-influenced Punk Rock outfit, but quickly moved in a more Post-Punk direction before releasing their first EP, New Art Riot, in 1990. Their debut album, Generation Terrorists, was released in 1992 and sported a more mainstream, Guns N' Roses-influenced sound. In this period, the band tried to attract more attention by going to the press and bashing a ton of their contemporaries, especially Shoegazing bands like My Bloody Valentine and Slowdive (who they called "worse than Hitler") and Madchester bands like the Happy Mondays and The Charlatans. This backfired on them badly and got them massive criticism that only worsened when Wire infamously declared during a Christmas concert the same year, "In this season of goodwill, let’s pray that Michael Stipe goes the same way as Freddie Mercury pretty soon," but they managed to stay above the water with their Darker and Edgier Grunge album Gold Against the Soul.

Tragically, the band's rhythm guitarist and lyricist Richey James Edwards vanished in 1995, possibly over the side of the Severn Bridge, after a long history of depression, alcohol abuse, self-harm and anorexia. He was declared presumed deceased in 2008. His disappearance occurred less than a year after the release of the controversial but critically acclaimed release, The Holy Bible, a noisy, angst-ridden collection of tracks dealing with heavy subject matter such as prostitution, the Holocaust, political disarray, and eating disorders.

The band achieved mainstream success in 1996 with Everything Must Go, which contained a grandiose sound in many ways reminiscent of the Britpop movement popular at the time. The followup album, This Is My Truth Tell Me Yours, had a similar sound and enjoyed similar success. Their later releases have tended to be more polarising, but all have been successful, to varying degrees.

The Manics' songs are characterised by highly political, often confrontational lyrics and thematic bleakness to the point of nihilism, as well as diverse cultural references ranging from Vincent van Gogh to Marilyn Manson to Sylvia Plath. They were notably the first popular Western rock musicians to play in Cuba. In their native UK, they have had two number one singles, "If You Tolerate This Your Children Will Be Next" and "The Masses Against the Classes".

was released in 2010, offering a semi-fictionalized account of the life of Richey Edwards leading up to his mysterious disappearance. An excellent review by an ardent fan can be found here

, and a followup interview with Ben here