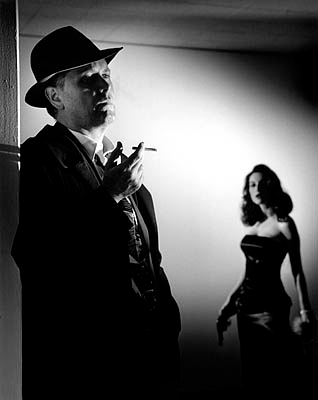 Private Detective? Check. Femme Fatale? Check. Chiaroscuro lighting? Check. This is Film Noir.
"You need cops, venetian blinds, lots of smoking, hats, sweat, dead-end streets, guys who know all the angles except for the one that ends up sticking out of their backs. Sirens of the automotive and female kind."
— James Lileks, The Bleat, "Black & White World"

For added effect, play one

while reading the article.

Film Noir (literally "black film" in French) is a genre of stylish crime dramas, difficult to define, but the 1940s and '50s were the classic period. Whether works since then can be accurately classed as Noir is a subject of much debate among film critics.

Film Noir, and the literature from which it is drawn, is the progenitor of several modern genres, particularly cyberpunk. Common plots of noir films include murder (and subsequent murder investigations), heists, con games, blackmail schemes, and (mostly) innocent men or women wrongly accused of crime. Use of the double-cross and cigarette smoking are mandatory. Complicated plots may be further convoluted by flashbacks and flash forwards, with the narration tying everything together—assuming we can trust it.

Noir, in the classic and stylistic sense, is visually darker than your average gangster picture, playing with light and long, deep shadows instead of bright, documentary-styled camera work. This visual motif is so iconic that homages and parodies are almost universally Deliberately Monochrome, using a transition between colour and black and white where necessary. Scenes are often filmed on location, and night scenes are shot at night. Camera angles are often very creative and unusual, heightening the viewers’ sense of unease, adding to the atmosphere. The contrast between light and dark is sometimes used in the cinematography to reflect the difference between the villain and the protagonist(s). It rains most every night in Film Noir; filmmakers admit that this is entirely because at night wet pavement looks cooler than dry. Also, the rain makes it plausible that no one else is around.

Film Noir is not really a genre in any sense, rather it reflects a tendency in certain American films of the 40s and 50s where crime and gangster stories are infused with an excessive visual style, a modern urban sensibility and a powerful sense of moral ambiguity. These movies differed from the crime movies of the 30s, the Depression Gangster films such as The Public Enemy or the original Scarface, in that criminal behaviour is no longer relegated to gangsters or ethnic ghettos, and the plots don't usually revolve around turf wars or police clampdowns. Protagonists in films noir are often normal people who get involved in crime, and the motivations are no longer just social or circumstantial but psychological and personal. The standard noir plot is, in broad terms, best summed up as centering around a protagonist who, usually by pure chance, is placed in a complex and dangerous situation completely beyond their control where they are pitted against an adversary whose identity and motives are not immediately obvious. The system and the law is usually either apathetic to their plight or is even outright working against them, meaning that they will have to take up the fight and make sense of it all by themselves or die trying. As a style and sensibility, Film Noir was flexible to include hybrids such as the Western-Film Noir (The 1947 film Pursued with flashbacks, Dark and Troubled Past, high contrast black and white lighting and weird Freudian themes), and even the film-noir musical (The Man I Love, Love Me and Leave Me) and in the case of Leave Her to Heaven a Film Noir in technicolor.

Trying to explain Film Noir is hard, since it's kind of a mix of European cynicism and post-war American angst. It involves a clash between crude pulp fiction narratives and complex storytelling and characterization, which itself derived from emerging psychological research on criminal behavior, as well as wider influences in modern art and literature. The term was first used by French critics (hence the name) and it derives from "Serie Noir," the label of French translations of American pulp fiction, and French imitations thereof, which were highly popular in France at the time. French critics looked at the American crime films from their perspectives of post-Occupation France, which to some extent led them to overemphasize the doom and gloom of American films by projecting their experiences onto their interpretations of these films. Later, American writers when translating these articles into English brought this into Pop-Cultural Osmosis.

The mix of European cynicism with American landscape is also borne out in the fact that several directors of films noir — Billy Wilder (who lost his mother in Auschwitz), Robert Siodmak, Fritz Lang, Otto Preminger — were refugees, exiles and emigres from Nazi Germany, being quite active in 1920s Berlin which in many ways was the closest a real-life city came to being the exaggerated City Noir landscape. The lighting in Film Noir was also strongly influenced by European trends, especially German Expressionism, but later after the war, the Italian neorealist films of Roberto Rossellini also influenced it greatly. The subtext of many of these films often dealt with the trauma of the returning Shell-Shocked Veteran (most notably, Act of Violence) and the rising Red Scare and The Hollywood Blacklist which made the working climate in Hollywood highly paranoid and hostile, and this infused the films made in the late '40s.

The standard Noir landscape is a large, oppressive city (filmed in dark and dusky conditions to create a moody atmosphere). Familiar haunts include dimly-lit bars, nightclubs filled with questionable clientele (including the Gayngster) whom the lead may intimidate for information, gambling dens, juke joints and the ubiquitous seedy waterfront warehouse. At night in the big city, you can bet the streets are slick with rain, reflecting streetlights like a Hopper painting. Most of the characters (including the lead) are cynical, misanthropical and hopeless all the way through the film, and never find true redemption. It is important to note that the term "Film Noir" was not available to the people who made them in the '40s and '50s. As Robert Mitchum famously stated, "We called them B-Movies." It comes from later audiences and critics who rediscovered these films in revival theaters and clubs and picked up the subtext, visual clues and other Hidden Depths. Many historians feel that the classic Film Noir genre died when it became self-conscious. Raymond Borde and Etienne Chaumenton cite the MGM musical The Band Wagon (made in 1952), where the final number featured a technicolor parody of a Mickey Spillane crime setting, with Fred Astaire and Cyd Charisse playing the detective and femme fatale in an obvious send-up. Others feel that Orson Welles' Touch of Evil was the real end, since it was made by the director of Citizen Kane (which, while not a Noir, influenced the lighting and style of several other films noir), and the genre conventions were pretty much stretched inside and outside. They also argue that Noir only worked in a climate of censorship, as the crime genre often fell Beneath Suspicion allowing writers and directors more chances to subvert cliches. Once censorship eroded, Film Noir had pretty much served its purpose and achieved its goals.

Attempts to revive this style led to Neo-Noir, which with some exceptions tends to Flanderization. The tone and outlook must be bleak, defeatist, and pessimistic, always suggesting a sliminess beyond what it can show. Nobody gets what they want, and everyone gets what's coming to them. Characters are often armed — revolversnote especially Snubnosed .38's if you're a cop or a dame, Colt 1911s, and if they need More Dakka, tommy guns. Also, no self-respecting Film Noir thug will be seen without his brass knuckles. They'll probably wear a Fedora or trilby hat with a trench coat. Frequently the ending will be low-key and leave no one character happy or fulfilled. Commonly, there is also a great deal of sexual tension between the hero and the female lead; Noir stories are quite risqué. The original Film Noir era followed the Hays Code, so the odds of a female lead removing her clothing are minimal, but even so, she'll often have some fine gams on display. This applies to modern versions; gratuitous nudity or scenes of excessive violence are hinted at rather than portrayed. It is often what is not seen that adds to the mystery and suspense.

Film Noir usually features the Anti-Hero, Anti-Villain, Villain Protagonist, the ambiguity often resting on questions of trust, leading to an atmosphere of paranoia where Poor Communication Kills regularly. The conclusion may or may not tie up all the loose ends, with the major mystery being the morally ambiguous theme of the story. These factors contribute to the widely-held opinion that Film Noir works are among the best artistic works of all time and contributed greatly to the maturity of cinema as an artform.

See Film Noir Index for a listing of live-action films noir. Examples from other media are listed below.

Not to be confused with the religious conspiracy anime Noir (although that is an example of the genre).

Other tropes associated with Film Noir:

A common form of Formula-Breaking Episode is the Noir Episode — a work spends a single episode homaging or parodying Film Noir style (or just has everyone wearing trilbies and talking about the rain, in black and white). Fantastic Noir is a sub-genre with fantastic or Science Fiction elements. See also our Write a Film Noir guide.

In one scene, Rarity talks to Pinkie about her stardom while the scenery changes to a Film Noir style.

In one scene, Rarity talks to Pinkie about her stardom while the scenery changes to a Film Noir style.