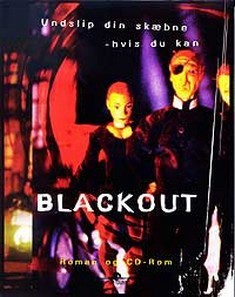 "Escape your fate — if you can."
Advertisement:

Blackout is a Danish Psychological Horror Adventure Game created and produced by Michael Valeur and Deadline Games and released in 1997, using Full Motion Video, puppets, and hand-build miniature sets to tell a dark and disturbing story. The lack of actual challenges and focus on story and environments arguably makes it an early example of an Environmental Narrative Game. The game came on three CD's and also contained a novel, providing additional information on the story from some of the side character's points of view.

The story of the game proper starts when you, the main protagonist, wakes up in a messy and a dark apartment to the sound of a phone ringing, having lost most of your memory and as a result having no idea who or where you are. Answering the phone only gives a cryptic message, asking you if you have fulfilled your task, and a examination of your surroundings reveals blood stains on the walls and headless body in the bed. Before you can inspect the body any closer, you immediately have another blackout, and when you wake up again, you find a notably cleaner apartment, and the body and any evidence it has ever been there are gone. Thus begins a search for your true nature, the cause behind your madness, the constant blackouts and the identity and fate of the body.

The game, as it is, is quite open-ended, allowing the player a lot of leeway to explore a dark and rather eerie City Noir through four different neighborhood hubs; the mundane Uptown, the shady Downtown, the Docks, and the concrete Suburbs. As the player does so, the game subtly tracks their activities as well as the occasional choice they make, and uses them to inform the Player Character's personality, resulting in different reactions from the game's cast of characters as well as ultimately determining how the story ends.

Should not be confused with the book Blackout, or the Game Show Blackout.

The game originally only saw a release in Scandinavia in local languages, so a copy of the original can be quite hard to track down nowadays, though a remastered version with a build-in English translation for tablets is supposedly in the works

. Until then, a Let's Play with English subtitles is available here