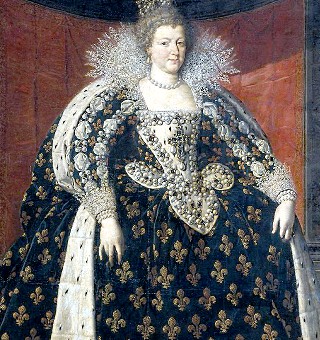 The French royalty paired this symbol with ermine, the fur of purity.* Insert joke about France and promiscuity here.
Advertisement:

French for "flower of the lily", the fleur-de-lis (⚜) is a common symbol used in medieval heraldry, often to signify purity (in some cases, it was associated with the Virgin Mary).

The symbol was used in many countries, but is most notable with pre-revolutionary French royalty, because of their common use of gold fleur-de-lis on royal blue backgrounds. It was used on their flags, on their coats of arms, and as Symbol Motif Clothing on the kings' royal robes and the queens' Pimped Out Dresses (as in the picture on the right and this one

In modern fiction, it's often a motif to refer to the grander styles of old. In Historical Romance, it's often used, sometimes correctly and sometimes not, to prove that the Love Interest is actually hidden royalty or nobility.

May occasionally show up in particularly creative Wingding Eyes.

Note that in anime and manga the white lily motif refers to something else entirely.