"Tiger, tiger, burning bright; in the forest of the night."
—Clovis 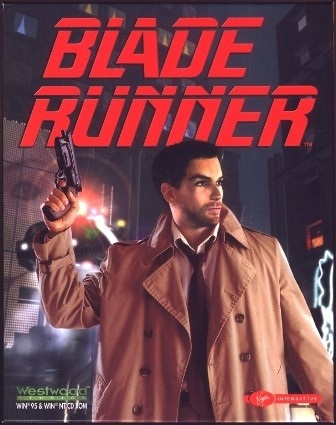 Blade Runner is a 1997 point-and-click Adventure Game developed by Westwood Studios for the PC and published by Virgin Interactive. It is a rare example of a video game based on a movie which elects to develop a plot in parallel with that of the movie, rather than attempt to replicate the movie's plot (and, as a result, was well-received).

The game follows the story of Ray McCoy, a Blade Runner, who works at the same precinct as Rick Deckard, the protagonist of the eponymous movie. McCoy is tasked with tracking down a group of replicants suspected of murdering animals — a crime considered nearly as heinous as murdering humans, since most animal species are extinct and real specimens are exceedingly rare. But along the way, McCoy realizes that the seeming innocuous case is more complicated than he thought...

Blade Runner was the first real-time 3D adventure game and uses voxels rather than polygon-based renderers. It also featured a semi-randomized plot, randomly choosing at the beginning of each game which characters are replicants, which affect the storyline, adding rare replayability to an adventure game. It was well-received

for its compelling story and exploration of the Blade Runner universe, receiving an aggregate score of 76.78% on GameRankings.

Encouraged by the game's critical success, Virgin Interactive toyed with plans of having Westwood make a sequel, but it was eventually determined that the cost of production would make the game commercially unviable, and the idea was scrapped.

For many years, the game was thought lost to time, due to being out of print and prevented from a re-release on digital platforms due to a combination of being stuck in legal limbo and the loss of the original source code. However, thanks to Alcon Entertainment securing the rights to the game, and dedicated coders managing to reverse engineer the source code and recreate it in the ScummVM engine, the game saw a re-release on GOG.com in December 2019. In addition, Alcon Entertainment and Nightdive Studios are working on an Updated Re-release named Blade Runner: Enhanced Edition which will feature updated character models, animations and cutscenes, and in addtion to PC, they also plan to release it on PlayStation 4, Xbox One and Nintendo Switch. It has been delayed by the revelation that the original game code is lost and must be reverse engineered from retail copies. The remaster was finally released on June 23, 2022.

Not to be confused with the 1985 game for the Commodore 64, ZX Spectrum and Amstrad CPC.