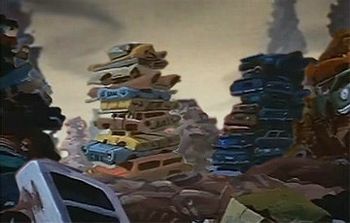 It all ends here, one way or another...
Advertisement:

Dumps and junkyards are, just like abandoned warehouses, a common setting for fights, club houses, secret meetings, and the various other fantastic situations fictional characters get themselves into. There's something about dumps— everything there is dirty, old, worn out, broken. Symbolically, it's a place of decay; pragmatically, there's lots of junk to play with, and it can be broken or blown up without having to worry about property damage.

Expect towering columns of crushed cars and neat piles of assorted garbage, perfect for hiding behind; a giant magnet or claw that can be easily operated by someone without training; a Conveyor Belt o' Doom leading into a crushing machine or incinerator; at least one junkyard dog; plenty of Trash Talk; and brown. There might even be some rewards for anyone willing to sift through the scrap, such as a rusted Cool Car or some impressive improvised weapons to wield.

Taken to extremes, this idea can lead to an all-out Landfill Beyond the Stars. Our heroes might end up here after escaping via Trash Landing. Expect to see a scrap-loving Metal Muncher living there in more fantastical works. See also Trash of the Titans. Not to be confused with Sadness Tropes.

For the Adventure Game, see Down in the Dumps.