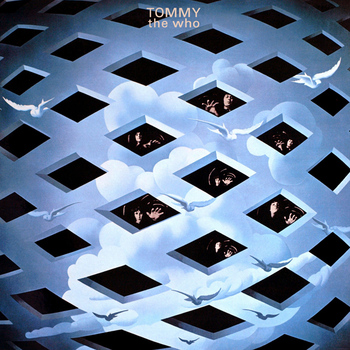 Sickness will surely take the mind where minds can't usually go: come on the Amazing Journey, and learn all you should know.
"Captain Walker
Didn't come home
His unborn child
Will never know him
Believe him missing
With a number of men
Don't expect
To see him again..."
Advertisement:

Tommy is the fourth studio album by The Who, released in 1969. Their best-known and most influential album, its release introduced the world to the concept of Rock Opera, made the Who into a household name in Britain and the US and propelled what had previously been a typical '60s mod band into the annals of rock history.

Born at the end of World War I (World War II in the movie and Broadway versions) to a war widow, Tommy Walker is an ordinary child growing up in postwar Britain until his father, presumed dead but actually missing behind enemy lines for several years, comes home, finds his wife with her new lover, and kills him in self-defense (in the Broadway version, anyway; the movie version has the new lover kill the husband in self-defense, and the album itself leaves the nature of the event deliberately ambiguous) while Tommy witnesses it all in a mirror. Traumatized by the experience, and his parents' exhortation that "You didn't hear it, you didn't see it, you won't say nothing to no one ever in your life", Tommy is struck deaf, dumb (i.e. mute), and blind.

As Tommy grows from a boy to a young man, his disability leaves him despised by his peers, and even his own family turns against him — he's beaten and tortured by his cousin, sexually abused by his uncle, and his parents consider institutionalizing him after a doctor tells them there's nothing physically wrong with him. The only things keeping Tommy sane are his memories and his "visions" — a sensation of a spirit guide showing him the true nature of the universe, which eventually manifests itself, as far as Tommy is concerned, in the most mundane of leisure activities — pinball. He becomes a "Pinball Wizard"; even though he cannot see the machine nor hear it, he can feel the vibrations of the table under his hands, which enables him to outplay and outscore anyone. He develops a fandom because of this; his celebrity making his family rich and famous.

Eventually, he gains, or regains, his senses after a cathartic moment wherein the mirror in which he glimpsed the original murder is smashed. Free to speak for himself, Tommy becomes a spiritual leader to the fans he's gained through his playing and seeks to create a new religion to teach the world about the revelations he acquired during his blindness. Tommy gradually discovers that his disciples are more interested in a quick fix than spiritual enlightenment; he warns them that they can't follow him through drinking, getting high, or dropping acid, and when they beg him to give them some kind of easy spiritual key he forces them to play pinball while wearing blindfolds and earplugs. In the end, the masses rebuke and abandon him - and it is then that Tommy, broken, alone, and possibly dying, finds God.

Being something that delivers plot through music, you have to make some allowances and read into it in some places. That said, it has much more continuity than many examples of Rock Opera and has a very definite plot arc embedded in the catchy tunes. The story is heavily inspired by Pete Townshend's then-recent conversion to the teachings of Meher Baba and his subsequent rejection of psychedelic drugs, a theme he would continue to explore in later albums.

In addition to the original LP and several live recordings by the Who, a number of adaptations have been produced, including:

See also Quadrophenia, The Who's second Rock Opera, and The Wall and The Rise and Fall of Ziggy Stardust and the Spiders from Mars, those other incredibly influential rock operas.

Note: Original vinyl pressings were issued in "automatic sequence" designed for record changers, with sides One and Four on the first disc and sides Two and Three on the second. Early CD releases are across two discs, one for each part (corresponding with the LP release); CD releases since 1990 are on a single disc.