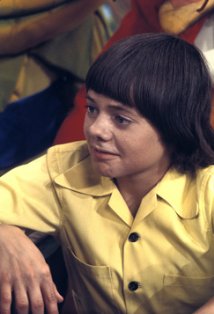 Considering himself at home.
Advertisement:

Jack Wild (30 September 1952 – 1 March 2006) was an English performer who was best known for playing the Artful Dodger in the film adaptation of Oliver! and for playing Jimmy in the trippy children's series H.R. Pufnstuf.

Coming from a very modest background in west London, he was discovered while playing football. The lady who discovered him was the theatrical agent June Collins, mother of one Phil Collins (who played on the same team as Wild). She then enrolled him in the Barbara Speak Stage School in Acton, where during his studies he landed bit parts in various television series including Out of the Unknown and Z Cars.

Not long after his enrollment, Wild and his older brother Arthur were cast in the West End production of Oliver — Arthur in the title role and Jack as one of Fagin's men. Jack sought to be cast as the Artful Dodger but was turned down because he was too short. However, he was cast in that very role in 1967 during pre-production of the film adaptation.

When the film was completed and screened for the awards season, Wild was nominated for:

At the premiere of the film, Wild was with the American producers Sid and Marty Krofft, who were looking to cast a young boy in their latest project. Wild was then paid a million dollars for his role as Jimmy in Pufnstuf, and he and his brother then moved to Los Angeles where Wild stayed with Marty Krofft's family during the production of the show.

Around this time, Wild was ascending to Teen Idol status. He regularly appeared in teen magazines such as Tiger Beat and even made the transition to recording artist, cutting his debut record in 1969. In 1970, after production on the Pufnstuf series had ceased, Wild began work on the film adaptation.

After the release of the movie Wild went on to star in films aimed at children and teens such as Melody, The Fourteen and Flight of the Doves. However, around this time his drinking habit was starting to debilitate his career and by the age of 21 he was a registered alcoholic and diabetic. His acting roles grew to be sporadic (in ten years he went from being the darling of British media to starring on a British educational show about maths), and while in 1981 he was given the chance to star in a TV series with Suzi Quatro, it was cancelled due to his erratic behaviour.

In the late 1980s he admitted himself to rehab and became a born-again Christian. From then on he played parts in both pantomimes and "serious" theatre, but in 2004 he had to undergo surgery to remove his vocal cords due to excessive damage from smoking and drinking. He died of oral cancer in 2006. He is survived by his second wife, Claire Harding.

Among Jack's purchases in the early '70's was a Moog Minimoog synthesizer, which Wild thought was defective as it only played one note at a time. Because of this, he sold it for very cheap to a session musician named Rick Wakeman. This was Wakeman's first Minimoog, upon which helped Wakeman define his multi-keyboard Progressive Rock sound and popularize synthesizers in rock music.

His biography, A Dodger's Life, was released in October 2016.