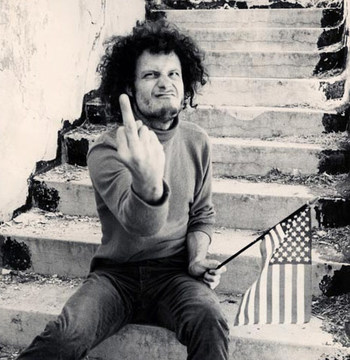 The ultimate underground artist, Larry Wayne Fischer, or Wild Man Fischer (named by Solomon Burke), was a singer/songwriter from the late 60's.

A diagnosed schizophrenic, Wild Man Fischer was born on November 6th, 1944. Trying to stab his mother when he was 16, he was diagnosed and put in a mental institution. He left, only for his brother to take him back. And then he was let free, having to sing songs for a dime on the streets of L.A.

Frank Zappa saw him on the street and let him perform in his band. Fischer got an album produced by Zappa, An Evening with Wild Man Fischer, containing many of the songs he sang on the streets mixed with a few actual street performances. Frank fired him later after Larry threw a jar at his baby, Moon Unit.

Fischer performed the first single and album for Rhino Records, and performed two albums with Barnes and Barnes (of Fish Heads fame). He had a documentary made about him called Derailroaded, which has people such as like Barnes and Barnes, Dr. Demento, Mark Mothersbaugh, "Weird Al" Yankovic, and Larry's brother discussing Larry's history. Larry later died in 2011.

"You've got me thinking about the past, Frank."