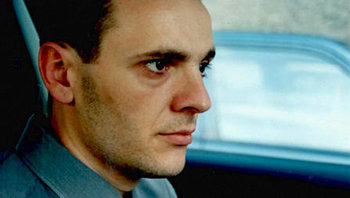 Trafic (yes, "Traffic") is a 2004 short film from Romania, directed by Cătălin Mitulescu.

This 15-minute short revolves around a man, presumably in Bucharest, who is stuck in traffic. By his dress he seems to be a white-collar professional type. He is late for an important meeting. He also is getting persistent phone calls about his little daughter—she may, or may not, have swallowed a hairpin while under the care of her babysitter. After seething in traffic for a while, the man sees a young woman selling beverages to traffic-bound drivers like him. He makes a momentary break for freedom.

No connection with the Jacques Tati feature Trafic.