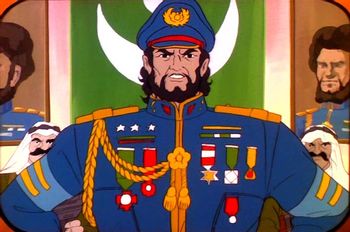 "There are no offensive stereotypes in the glorious Socialist Democratic Federated Republic of Carbombya!"
Dear Lisa, as I write this, I am very sad. Our president has been overthrown and—
[voice changes to that of a man]
—replaced by the benevolent General Krull. All hail Krull and his glorious new regime! Sincerely, Little Girl.
— The Simpsons, "Cape Feare"
Advertisement:

A Sub-Trope of Evil Overlord, as well as The Caligula in some cases. The militaristic leader of a fictional third world state or nation (often located in Latin America, Central or Eastern Europe, sub-Saharan Africa, or the Middle East/North Africa). Almost invariably rules a People's Republic of Tyranny or a Banana Republic, though other flavors of dictatorship are not unheard of. Almost Always Male, and often either Large and in Charge or The Napoleon/Mister Big. If they do have families, they will naturally be The Patriarch as a parent. In the field, they usually tend to be a General Ripper, and sometimes a General Failure to show that they're all swagger, no substance.

His reign tends to be characterised by human rights abuses, political repression, ethnic persecution, judicial killings, extrajudicial killings, nepotism, corruption (particularly embezzlement and bribery), and frequent purges of any subordinates he finds suspicious. His political viewpoints (if he even has any) usually veer towards Communism, Fascism, or some combination of the worst aspects of both. Of course, none of this will stop him from proclaiming himself "The People's Liberator" or otherwise billing himself as a great hero. He may have attended a prestigious Ivy League or Oxbridge university in his youth, where he Majored in Western Hypocrisy. He is often the target of American assassination attempts and rebel groups, who may or may not be figments of his own paranoia. A common feature is to have a (frequently communist) guerrilla movement training to overthrow them. Once their revolution happens, the general goes into hiding to train his own revolutionaries to overthrow the new revolutionary government, that is just as corrupt and repressive as the old one. A common twist is to make him a Straw Hypocrite: he doesn't really care for his stated ideology, but uses it to cement his hold on power. He also has a tendency to make extremely long and winding speeches in public or over the national airwaves.

Tends to be based on one or more real-life military dictators, and particularly Latin American ones, who experienced so many that they created their own term to describe such leaders as a caudillo.

Common inspirations include Fidel Castronote Who likely inspired the tendency of such characters to be a Windbag Politician, being one himself, Fulgencio Batista, Juan Domingo Perón, Augusto Pinochet, Alfredo Stroessner, Francisco Solano Lopez, Porfirio Diaz, Victoriano Huerta, Manuel Noriega, and Hugo Chávez. The many generals that led the Argentine and Brazilian military regimes are also favorites. Above all, the Trope Codifier was likely Rafael Trujillo himself, who had the chest of medals, megalomania, brutality, corruption and Caribbean Island to match; he was and is still considered one of the cruelest of all Latin American caudillos, and his rule so horrific that at one point, multiple nations attempted to overthrow him.

While traditionally Latin American, this type of villain can be based around any nation, particularly those of various developing and/or third-world regions across the globe. This trope is often used to make an Anvilicious point about said real-life dictator's policies.

If East or Southeast Asian, expect them to be an Expy of Yuan Shikai, Chiang Kai-shek, Hideki Tojo, Suharto, Ferdinand Marcos, Park Chung-hee (and his successor Chun Doo-hwan), Hun Sen, Than Shwe and especially The Rulers of North Korea.

If European, usually expect them to be based on fascist dictators such as Benito Mussolini, Ante Pavelić, and Engelbert Dollfuss; or communists, such as Leonid Brezhnev, Nicolae Ceausescu and Josip Broz Tito if Eastern. Other prototypes include António de Oliveira Salazarnote Who started off as part of a military junta

that he later succeeded, Francisco Franconote Who gave himself the official title of caudillo, Ioannis Metaxas, Miklós Horthy, Alexander Lukashenko, Ramzan Kadyrov (and his father Akhmad), and Slobodan Milošević.

The Middle East and North Africa is another favourite location for these types of rulers to thrive, especially in more contemporary works set after The Gulf War or during The War on Terror. Prototypes include Saddam Hussein, Muammar Gaddafi, Bashar al-Assad (and his father Hafez), Ali Abdullah Saleh, Omar al-Bashir and Hosni Mubarak.

Surprisingly, Adolf Hitler is rarely parodied in this manner, perhaps because the man himself is enough of an acceptable target (although one of his henchmen, Hermann Goering, did famously dress this way). Joseph Stalin is sometimes parodied in this way and has influenced the communist variant of this trope, but, like Hitler, he is uniquely infamous enough to represent a specific archetype of his own. Like Stalin, Mao Zedong sometimes gets parodied like this and has influenced fictional examples (especially East Asian communist ones), but also like Stalin, he's iconic enough to be a stand-alone archetype. While never an actual head of state, Che Guevara is sometimes parodied in such a manner as well, as is fellow militant rebel Jonas Savimbi.

Usually dressed in fancy military garb, with a Chest of Medals and topped with a Commissar Cap, though if he's a Castro or Che imitation (particularly with characters who are part of the standard guerrilla subplot), he might wear plain olive drab fatigues and a Ridgeway cap

or Che-style black beret instead. Common traits include facial hair of some sort, cigar smoking, dark sunglasses, a hatred of democracy, a long list of self-bestowed grandiose titles, and naming cities and monuments after himself. Because Generalissimos often have little political credibility but self-delusions of grandeur, they are often also called Tin Pot Dictators (not to be confused with Tin Tyrants).

Note that generalissimo (Latin generalissimus, the absolute superlative of "general") is a legitimate rank in some militaries, denoting a seven-star general.note In the United States, the equivalent is General of the Armies, only held by John J. Pershing after World War I and posthumously to George Washington, Douglas MacArthur was proposed to be promoted in preparation for the Invasion of Japan, as the invasion would involve enormous amounts of manpower and a would have a large command staff The trope namers come from many dictators who awarded themselves with this rank primarily due a big ego and bloated sense of self-importance, but you don't necessarily need to be a dictator to be a Generalissimo - actually many Real Life Generalissimos have been brilliant and competent field commanders. The first to bear the rank was Albrecht von Wallenstein, the Imperial commander-in-chief in the Thirty Years' War. A similar (theoretical) naval rank of admiralissimus exists; so far, only Haireddin Barbarossa of the Imperial Turkish Navy and Albrecht von Wallenstein have borne it.

The military dictator of Medici. Di Ravello rules his nation with an iron fist and is Rico's main target.

The military dictator of Medici. Di Ravello rules his nation with an iron fist and is Rico's main target.