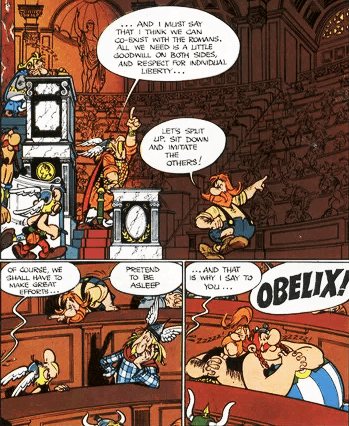 "Somebody once said that a politician is a person who can talk for hours and never actually say anything. If that's true, Hideo Kojima could run for government and be emperor of the universe by mid-afternoon."
— Yahtzee, Zero Punctuation
Advertisement:

A kid-friendlier version of the Sleazy Politician, where the main purpose of elected officials is to bore the audience half to death with rhetoric. Frequently involves malapropers, apologies for their lack of expertise in speaking, and (broken) promises of being short and to the point.

Subtrope of The Bore. Sister trope of Old Windbag. Compare Character Filibuster. Often a popular trait of The Generalissimo.