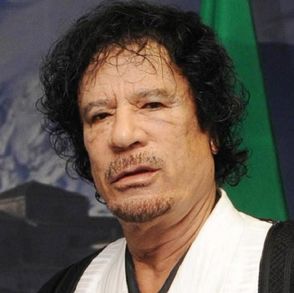 Abu Shafshufa
"He has a split personality — both parts evil."
— Sudanese President—and no saint himself—Gaafar Nimeiry

Colonel Muammar Muhammad Abu Minyar al-Gaddafi (circa  1942 – 20 October 2011) staged a bloodless coup d'état of Libya on September 1st 1969, where he led a small team of junior officers and overthrew then-King Idris, while he was in Turkey for medical treatment. Disposing of Crown Prince Sayyid Hasan ar-Rida al-Mahdi as-Sanussi (Idris' nephew), they abolished the monarchy and proclaimed the new Libyan Arab Republic. This was likely fueled by the frustration and shame felt by Libyan officers, who stood by helplessly at the time of Israel's swift and humiliating defeat of Arab armies on three fronts in 1967. Under Gaddafi, Libya was considered a pariah state by the West; among the allegations were oppression of internal dissidence, acts of state-sponsored terrorism, assassinations of expatriate opposition leaders, and crass nepotism exhibited in amassing a multi-billion dollar fortune for himself and his family.

Muammar Gaddafi's attempts to procure weapons of mass destruction began in 1972, when Gaddafi tried to get the People's Republic of China to sell him a nuclear bomb. In 1977, he tried to get a bomb from Pakistan, but Pakistan severed ties before Libya succeeded in building a weapon. After ties were restored, Gaddafi tried to buy a nuclear weapon from India, but instead, India and Libya agreed on the peaceful use of nuclear energy, in line with India's "atoms for peace" policy. Several people around the world were indicted for assisting Gaddafi in his chemical weapons programs. Thailand reported its citizens had helped build a storage facility for nerve gas. Germany sentenced a businessman, Jurgen Hippenstiel-Imhausen, to five years in prison for involvement in Libyan chemical weapons. Inspectors from the Chemical Weapons Convention (CWC) verified in 2004 that Libya owned a stockpile of 23 metric tons of mustard gas and more than 1,300 metric tons of precursor chemicals. Disposing of such large quantities of chemical weapons was expected to be expensive.

Following the overthrow of Saddam Hussein by U.S. forces in 2003, Gaddafi announced that his nation had an active weapons of mass destruction program, but was willing to allow international inspectors into his country to observe and dismantle them. U.S. President George W. Bush and other supporters of the Iraq War portrayed Gaddafi's announcement as a direct consequence of the Iraq War. Italian Premier Silvio Berlusconi, a supporter of the Iraq War, was quoted as saying that Gaddafi had privately phoned him, admitting as much. Many foreign policy experts, however, contend that Gaddafi's announcement was merely a continuation of his prior attempts at normalizing relations with the West and getting the sanctions removed, pointing out that Libya had already made similar offers starting four years before one was finally accepted. International inspectors turned up several tons of chemical weaponry in Libya, as well as an active nuclear weapons program. As the process of destroying these weapons continued, Libya improved its cooperation with international monitoring regimes to the extent that, by March 2006, France was able to conclude an agreement with Libya to develop a significant nuclear power program.

In regards to Israel, Gaddafi announced that any Arab wishing to volunteer for Palestinian terrorist groups "can register his name at any Libyan embassy [and] will be given adequate training for combat", even promising financial support for attacks. During the 1973 Yom Kippur War, Gaddafi sent one armored brigade, two fighter squadrons, and financial aid to Egypt.

After the 1986 Bombing of Libya and the 1993 imposition of United Nations sanctions, Gaddafi established closer economic and security relations with the west, cooperated with investigations into previous Libyan acts of state-sponsored terrorism and paid compensation, and ended his nuclear weapons program, resulting in the lifting of UN sanctions in 2003.

In early February 2011, major political protests, inspired by protests in Tunisia, Egypt and other parts of the Arab world,note Libya borders both Tunisia and Egypt broke out in Libya against Gaddafi's government, quickly escalating from protests into a full-blown civil war. Gaddafi vowed to "die a martyr" if necessary in his fight against the rebels and external forces. He fled Tripoli when rebel forces captured the city, and his whereabouts remained unknown until October 20, 2011. On that day Gaddafi was critically wounded in Sirte, either in a firefight with rebel forces, or by a NATO airstrike, and was captured, beaten, possibly sodomized and finally summarily executed together with some of his last remaining supporters. His last recorded words were, depending on the source, either "Don't kill me, my sons!", or "What did I do to you?" His corpse was put on display in a freezer for a few days, before being buried in an unmarked grave in the desert.

Has gone through a radical change in portrayal since the events of his overthrow: before 2011, he was mostly used as the butt of jokes about the many spellings of his name (a side effect of the vagaries of Arabic pronunciation) and for his eccentricities; today, his horrible acts are more likely to be emphasized. On the flipside, considering how Libya turned out after his death, there is a not-insignificant sentiment among opponents of the 2011 revolution that he may have been Necessarily Evil.