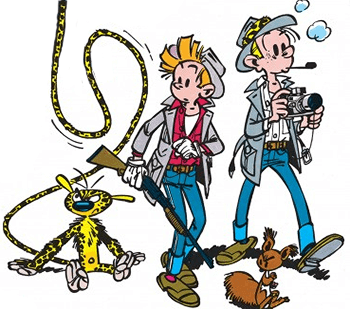 Spirou (left) and Fantasio (right), with the Marsupilami and Spip the squirrel.
Advertisement:

Spirou et Fantasio (Spirou and Fantasio) is one of the most successful Belgian comic book adventure series, spawning various spin-off series and two Animated Adaptations (one in 1992-1995, the other in 2006-2009).

Spirou is an intrepid hotel groom/reporter. With his sidekick Fantasio and his pet squirrel Spip, he has many adventures over the globe, fighting Mad Scientists and evil dictators, but also doing a fair bit of actual reporting on the side.

This series has the distinction of being one the few "work for hire" franchises of Franco-Belgian comics (most of them are owned by their initial creators or their estate). As such, various authors worked on the main series over the years:

The magazine for which this series was created, now titled Spirou, is still being published nowadays. It is now a weekly anthology of various comedy series, as well as serializing various adventure series of Dupuis's catalogue. Throughout the '90s and 2000s, its eponymous series barely appeared in it (due to frequent Schedule Slip), though Le Petit Spirou remained a regular presence. This changed with the one-shots, which have been published at thrice the rhythm of the main series so far.

Cinebook had been translating the books in English since 2009, alternating stories from the Franquin and Tome/Janry era.

, with a new episode every week.

A Live-Action Adaptation, originally scheduled for early 2017, was released in February 2018.

Spirou and Fantasio provides examples of the following tropes: