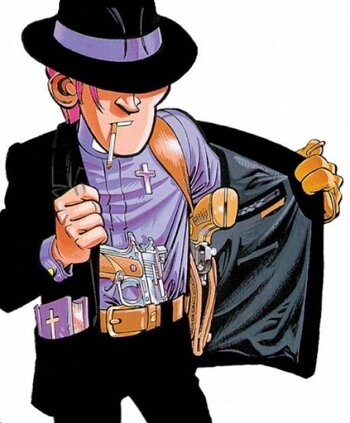 Packin some holy heat.
Soda is a European comic written by Philippe Tome, with art from Luc Warnant for the first two books and, from book 3 onward, Bruno Gazzotti. It elegantly mixes serious business, religious themes (often tongue-in-cheek or parodied), guns and the results of their use, extremely spectacular accidents, and humour. Soda is likely one of those comics that could come into existence only outside the United States, as it has all the elements to totally infuriate any religious person.
Advertisement:

David Solomon is a priest in New York. At least, that's what he tells his kind and old mum. Because she has heart problems and would get a heart attack if she ever discovered he is a police officer. Commonly known as "Soda" to anyone in New York who is not his mother, David's daily life is filled with violence and death. Both of them often involve a handgun that could put down an elephant with one bullet — Soda's handgun, obviously. Assisted by fellow cop (and romantic partner) Linda Tchaikovski and other fellow cop Babs, Soda has numerous adventures in New York, as well as a few back in his home town of Providence, Arizona. Each adventure is served with copious amounts of bullets, destruction, death, religious terminology, and, of course, humour.