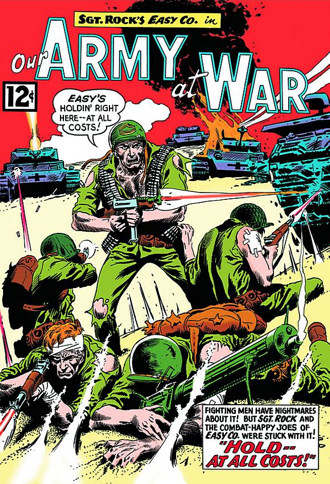 The character of Frank Rock himself developed in fits and starts, with his first appearances essentially being prototypes for the character who would ultimately be developed. The character continued being featured in the Our Army At War series. By the late 1960s, Rock's logo on the cover had become much larger than that of the comic book itself, which was finally renamed to simply Sgt. Rock in 1977. That series continued until 1988, but DC continues to publish occasional graphic novels, miniseries, and one-shots featuring Rock.

The series wasn't just about Rock, but Sgt. Rock and the "Combat-Happy Joes of Easy Company," and their adventures in the European Theater of Operations. A lot of guys went in and out of Easy Company, but a few prominent repeating characters include:

During the Silver Age, Sgt. Rock often had Crossover stories with DC's other recurring war features, including The Haunted Tank, Johnny Cloud, and Mademoiselle Marie. Inevitably, Rock eventually met Batman, Superman, and other DC superhero characters - sometimes in stories involving time travel, but sometimes with a "present-day" Rock. He even appeared in DC's trope-codifying Crisis Crossover, Crisis on Infinite Earths.

According to co-creator Robert Kanigher, Rock died "from the last bullet fired in the last battle on the last day" of fighting in the European Theater of Operations. This "Last Sgt. Rock Story" has never actually been told (Kanigher, alas, died in 2002), but a 2010 story in DC Universe: Legacies established it as Canon for the first time.

Prior to that, some continuities showed Rock surviving the war, going on to do things such as becoming a general and Chairman of the Joint Chiefs of staff, teaming up with Batman to fight Satan, and even teaming up with his own writer and artist (and Batman, again) to fight terrorists.

Sgt. Rock appeared in animated form in the Justice League episode "The Savage Time". While a live-action film version has often been discussed (both Arnold Schwarzenegger and Bruce Willis were attached at various times), no project ever made it out of Development Hell. However, Rock did appear in his own DC Showcase short in 2019 in which his Easy Company was lost in battle and he is assigned to lead the Creature Commandos instead.

See also: Sergeant Rock, a trope for which Frank Rock is both Trope Namer and a classic example.