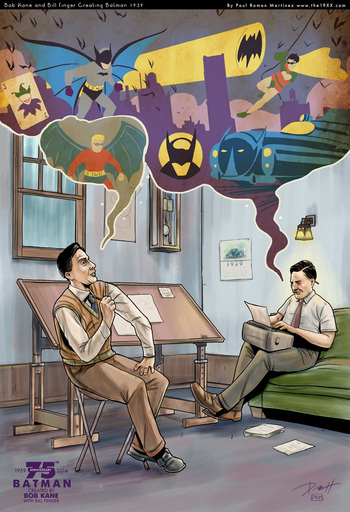 Bill Finger on the couch with the typewriter describing the Bat-mythos and Bob Kane on the drawing board describing his original idea.
Image

. Used with permission.
"Is Rob Liefeld really the one who created Deadpool if everything about the character that people like was done by others?"
— Linkara
Advertisement:

One fun aspect of being a fan is that you can ascribe Word of God selectively. Sure, Alice may own the franchise, but it's Bob — the writer, the producer, whatever — who left such an indelible impression on the property that, in your opinion, Bob is the one who made it good.

This trope is naturally more common with long-running properties with multiple creators, which is why there are so many examples from American Comic Books. When a character like Batman, Superman or Spider-Man has literally thousands of stories told by hundreds of writers over a period of many decades, it's not surprising that this trope comes into play.

Compare Adaptation Displacement, Can't Un-Hear It, Better Than Canon, and Covered Up. When done with a singular character, it may be a result of being the Creator's Favorite. Contrast Running the Asylum, where such people are often regarded as evil step-parents, and Only the Creator Does It Right, where fans think a work is better when its creator is actively involved in it. Not to be confused with Family of Choice, where the characters decide who they feel their real parents are.