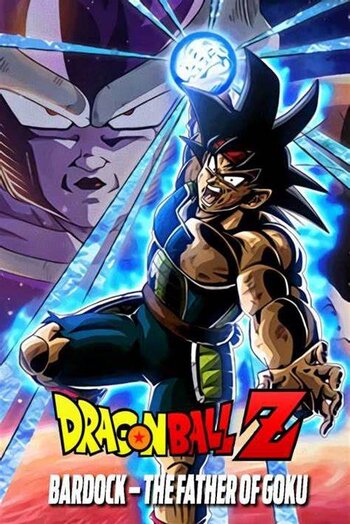 You Can't Fight Fate, but you can start a legacy.
Advertisement:

Dragon Ball Z: Bardock – The Father of Goku (also known as Doragon Bōru Zetto: Tatta Hitori no Saishū Kessen ～Furīza ni Idonda Zetto Senshi Son Gokū no Chichi～; lit. "Dragon Ball Z: A Lonesome, Final Battle 'The Father of the Z Warrior Son Goku, who Challenged Freeza'") is the first Dragon Ball Z TV Special made by Toei Animation (the second being Dragon Ball Z: The History of Trunks), airing during the the Freeza Saga, as well as a prequel of the series as a whole.

The special is centered around the Origin Story of Bardock, a low-class Saiyan who is also the father of Kakarot (Goku) and Raditz as he discovers a plot where Freeza intends to destroy the entire Saiyan race via psychic powers given to him by an alien whose race he destroyed the night before. With his new powers, Bardock realizes the visions he receives are no illusion…

The special was popular enough that Akira Toriyama integrated Bardock into the manga. A special called Dragon Ball – Episode of Bardock created in 2011, was made to serve as a What If? sequel, detailing Bardock's survival. A special feature in the Jaco the Galactic Patrolman manga called Dragon Ball Minus essentially serves as a prequel to this special with several changes in the details, solidifying Jaco's Stealth Prequel status to the Dragon Ball story as a whole.

Toriyama: With my works, I prefer lighthearted fare, so I have a tendency to avoid serious material. Even if I had written about the same past, it would have become lighter in tone by far.
Feedback