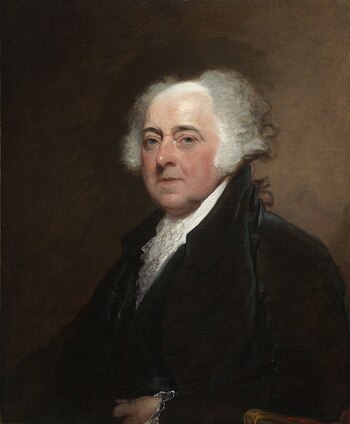 The First Vice President
Benjamin Franklin: Mr. Adams, I say you should write it!
To your legal mind and brilliance we defer.
John Adams: Is that so? Well, if I'm the one to do it,
They'll run their quill pens through it!
I'm obnoxious and disliked, you know that, sir!
— "But Mr. Adams", 1776
Advertisement:

John Adams (October 30, 1735 – July 4, 1826) was a Founding Father and the 2nd President of the United States (1797-1801). Serving between George Washington and Thomas Jefferson, Adams was the only President from the Federalist Party. He was also the first to reside in the White House, which was completed in the last year of his presidency.

Adams was one of the most intelligent American men of his time. A lifelong supporter of republicanism and a strong central government, he is considered one of the most important political theorists in early American history. His writings, notably his 1776 essay Thoughts on Government, were powerful arguments in favor of bicameral legislature and separation of powers. He also wrote the state constitution for his home state of Massachusetts in 1779; approved in 1780, the Adams constitution remains in effect (with extensive amendments) in Massachusetts, making it the single oldest written constitution in continuous effect in the entire world. His home state also gives him the distinction of being the only one of the first five presidents to not come from Virginia.

Passionately opposed to slavery, Adams was one of just two of the nation's first twelve presidents who had never owned slaves (the other was his son John Quincy Adams). He correctly predicted that it was a threat to the country’s unity. However, Adams was also a stubborn and prideful man who did not get along very well with even his closest political allies, and his argumentative personality hindered his efforts for the 1800 Election.

Adams and his wife, Abigail, were intellectual equals, and he often sought her advice on important issues. They founded a family who would continue to play a major role in national politics for generations; notably, their son, John Quincy Adams, would himself become President in 1825, one year before John Adams’ death.

He was a lawyer prior to his years as a statesman. In 1770, Adams defended the eight British troops involved in the infamous Boston Massacre at trial, obtaining acquittals for six of them and saving the other two from the hangman's noose by securing reduced convictions of manslaughter. This principled and skillful legal action earned him renown across the colonies—renown he parlayed into political attention to his opposition to British economic policy. Even there, Adams, who prided himself on his commitment to law, often found himself at odds with some of the more hot-headed types, particularly his cousin Samuel Adams (who organized the Boston Tea Party in 1773).

At the Second Continental Congress in 1776, Adams was one of the most vocal voices calling for independence from Great Britain. Thanks to his efforts, the Congress passed a Declaration of Independence which Adams helped his good friend Thomas Jefferson write. He was also the man who nominated George Washington to lead the Continental Army during the Revolutionary War. During the war, Adams served his country as ministernote The United States did not send "ambassadors" until 1893; in the 18th century, an "ambassador" was considered to be a personal representative of one monarch to another monarch, so republics like the U.S. did not send "ambassadors." to various European countries, where he won vital foreign support for the Americans. After the war, he was made the first American minister to Great Britain, and secured as good a relationship between the US and the mother country as could be hoped for under the circumstances.

In 1789, Adams became the first Vice President, serving under President Washington. Adams was rarely consulted for policy advice, and he notoriously called the vice presidency “the most insignificant office that ever the invention of man contrived or his imagination conceived.” Ironically, he also cast more tie-breaking votes in the Senate than any other Vice President. During his time as Vice President, Adams joined the New England-based Federalist Party, in spite of his sour relationship with party leader Alexander Hamilton. He also tried to create a formal style for the President, such as "His Majesty the President." Washington instead chose the modest "Mr. President," and Adams' enemies in Congress nicknamed the short and fat Veep "His Rotundity."

In 1796, Adams ran as the Federalist nominee for the presidency, and he won a narrow victory. Due to a loophole in the election system at the time, his opponent, Thomas Jefferson of the Democratic-Republican Party, became his Vice President. Keeping his predecessor’s Cabinet, Adams quickly was confronted with severe party divisions. Adams’ moderate faction was at odds with the more aggressive faction led by Hamilton, who often schemed with other members in an attempt to win control of the party. Additionally, Jefferson also worked behind the scenes to undermine Adams’ authority.

Just after Adams entered office, American relations with France strained severely due to something called the XYZ Affair. Adams sent ministers to France for important negotiations, but the French foreign minister Talleyrand demanded that the Americans pay him personally a huge sum of money just for the right to speak to the leaders. (This kind of bribe was not especially unusual in European politics at the time, but it seems that "Shit-in-Silk-Stockings" Talleyrand was unusually audacious in the size of the bribe he was seeking.) The American public was outraged, and things escalated to the point that the two countries soon found themselves in an undeclared naval war on the seas of the Atlantic. Known as the Quasi-War, it was marked by Adams building up the military while simultaneously trying to negotiate with France an end to the conflict. An impressive Navy was built by the Adams administration, and Adams would become known as the “Father of the American Navy.” In 1800, the new leader of France, Napoléon Bonaparte, reached an agreement that ended the Quasi-War, and Adams successfully managed to avoid an expansion of the conflict.

However, domestic policies proved to be Adams’ downfall. During the tense situation with France, Adams, at the advice of the Hamilton wing of the party, reluctantly signed a controversial series of bills known as the Alien and Sedition Acts. These acts gave the President the power to deport foreign-born residents deemed to be a threat and to arrest citizens who publicly criticize the federal government. While only ten people were ever arrested and these bills were going to expire by 1801, they were widely unpopular with the voting public. Additionally, Adams raised taxes in order to fund his military buildups, and this was seen as a pointless waste of public money after war was avoided. In eastern Pennsylvania, which went through an economic crisis due to the high taxes, farmers started to rebel, and Adams had to send the state militia to put down the riots. For many people, it looked like the aristocrat Adams was encroaching on the rights of the public and trying to create a dictatorship in the young country.

In the election of 1800, which had over-the-top negative campaign rhetoric so nasty that makes modern election campaigning sound positively polite and genteel, Adams lost to Vice President Jefferson, becoming the first incumbent to lose reelection. This was the first time in history an elected head of state lost reelection, and Adams remarkably chose to step down from office when his term ended rather than try to seize power with the military. In an attempt to limit Jefferson’s power upon the start of his presidency, Adams nominated a number of Federalists to federal judicial positions during his last few months in office. Critics labeled these last-minute nominations the "Midnight Judges." The most notable of these was his nomination of John Marshall as Chief Justice of the Supreme Court. Under Marshall, the Supreme Court would expand its powers and establish its authority to determine the constitutionality of laws passed by Congress. When his term officially ended, a bitter Adams refused to attend Jefferson’s inauguration.note This was at least partially because transportation of the era was extraordinarily difficult. The regular coach back to Massachusetts left hours before the inauguration, another would take days to leave, and Adams was anxious to get back home to get his private affairs arranged as quickly as possible. That said, he had the means to wait for the next coach, just not the desire to do so, for multiple reasons other than bitterness.

Adams also signed the Treaty of Tripoli with what was then Ottoman Libya. It allowed for peaceful trade relations between the two, but it's notable today because an article of the treaty states that "the Government of the United States of America is not, in any sense, founded on the Christian religion," a source of much debate today.

Adams lived a private life in Massachusetts after he left office. While his relationship with Jefferson effectively came to an end in 1800, Adams made up with his old friend around 1812 and the two resumed their correspondence. His later years were marked by personal tragedies, including the deaths of his daughter and his wife. However, he did live long enough to see his son John Quincy become President in 1825. Adams died on Independence Day the following year (the 50th anniversary of the Declaration); coincidentally, the same day as Jefferson. By popular account, Adams' last words were "Thomas Jefferson survives!" - actually, Jefferson died first. note His actual recorded last words were "Help me, child! Help me!" - a pained plea to his granddaughter, who was attending his bedside. He was 90 when he died, and remained the longest-lived President until surpassed by Ronald Reagan in 2001. Jimmy Carter currently holds the record, by the way.

Adams initially wasn't one of the more respected Founding Fathers, but his reputation steadily rose over time and, eventually, he was recognized as one of the men most responsible for the success of the American Revolution. He is probably most well known via 1776 (where he was played by William Daniels) and David McCullough's eponymous biography, filmed as a mini series by HBO in 2008, with the very appropriate Paul Giamatti in the role. Younger viewers may recognize him from the PBS educational animated series, Liberty's Kids, voiced by Billy Crystal. The phrase "sweets of liberty" was coined by Adams, and became the basis for the title of Sweet Liberty.

One of two Presidents whose son also became President, the other being George H. W. Bush. Both he and his son were the only two one-term presidents in the first half-century of the Constitution.