They Changed It, Now It Sucks! 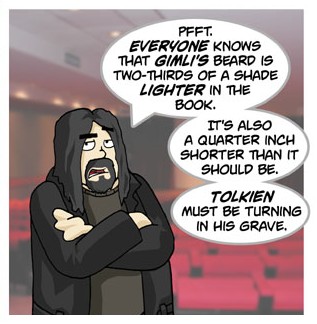 Not to mention the denouement was too short.
"If you want to make enemies, try to change something."
— Woodrow Wilson
Advertisement:

As long as it is still the same basic story and keeps all the best bits and characters intact, then it couldn't matter much less that Bob's bald, Alice dies in a train wreck instead of a car crash, the football game ended with a different score, and they cut the watermelon scene, right? It's a bit of a shame they screwed that bit up, but really, it's not like the entire work is Ruined FOREVER, right?

For some people, the mere act of adaptation is decay. A film version of something should be a direct word-for-word transcription, with utmost care that the sets, costumes and people be reproduced in every detail. If a character who wears a homburg in the original now wears a fedora, that will be enough to ruin the character, and therefore ruin the film. It will be all you will hear about from these fans on message boards, with them going on at length to explain how their homburg visually defined their entire personality in a way that a fedora never could.

Compare with Translation Style Choices, Darker and Edgier, Lighter and Softer, New Sound Album, Replacement Scrappy, Ruined FOREVER, Seasonal Rot, Network Decay, Jumping the Shark, Fanon Discontinuity, They Don't Make Them Like They Used To, So Bad, It Was Better, or even Damn You, Muscle Memory!.