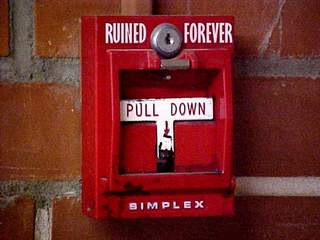 I DISAPPROVE OF THIS CHANGE AND SO DO MY INTERNET FRIENDS
"1984: The Transformers launches in the US, in toy, comic and cartoon formats, forever ruining Transformers."
— TFWiki.net's Timeline page

Oh no! A moment that you don't like has happened to your favorite fictional series! A new character appeared out of nowhere! Or your favorite character caught the Jerkass Ball that week! Or the latest iteration of the show has a new animation style, or a new voice actor, or a new theme song! Or there is a Musical Episode or Beach Episode not written by the creator of the show! Or there was a Tone Shift! Or maybe there was an explanation you didn't like! Or the series was rebooted, but the reboot was a far cry from the original!

The shark has truly been jumped over! Your show is now ruined FOREVER!!!

What? Ruined forever?! (slap!) Get a hold of yourself, man!

Sure, it might have been a dumb moment, but how do you truly know until the series has run its course? What if the new character turns out to not be as poorly executed as you feared? What if your favorite character is never handed the Jerkass Ball again? What if the plot for that Bizarro Episode or Beach Episode was Just For Fun, and the rest of the series sticks to what it does best? What if the tone shift actually helped the series? What if they retconned that explanation into something better down the road? What if the reboot actually got good reviews from critics and was praised for being fresh? What if that one change revitalized something, or makes something better?

The show isn't made by gods (despite what some may assume). People make mistakes. Shows can have low points but still have high quality throughout the run.

Just take a few deep breaths. You may think you have seen a clear Jumping the Shark, but those are rare moments. Take the actual Jumping The Shark from Happy Days. That moment was clear for at least three reasons:

How could the show fix that without ignoring the episode completely? There are plenty of other ways to jump the shark, but those are rare diamonds of crap... in the rough of crap. It's near impossible to tell when a show has jumped the shark until after the fact. Worse, if people are just rushing to declare jumping the shark for any moment they don't like, it comes across as Complaining About Shows You Don't Like.

Even worse than that, there are folks who feel the series is Tainted by the Preview - the show doesn't even have to be released for someone to declare it Ruined FOREVER. The same goes if the show has only been on for a couple of episodes before people start making dramatic statements of this nature; if the show's just started, that usually means that the producers are still seeing what works and what doesn't, so any reasonable viewer might have to allow for at least a few stumbles.

And there comes a point (especially with adaptations) that fans believe the current storyline or incarnation will somehow retroactively destroy the "purity" of the earlier work. Authors should not listen to these types of fans.

This trope is named for the "Ruined FOREVER

" page at the Transformers Wiki. Note the helpful included list of "things that have RUINED TRANSFORMERS FOREVER in the past." note In their own words: "In other words... pretty much everything."

Frequently a side effect of They Changed It, Now It Sucks!. Also known as Schrödinger's Shark, as its status as a shark jump can be very subjective.

If the fans are screaming "Ruined Forever!!!" and then are blindsided by a development no one can complain about, then you have And the Fandom Rejoiced.

When the fans are actually right, see Franchise Killer. When the drop in quality is real, but temporary, see Dork Age and Author's Saving Throw. Seasonal Rot could be either, depending on whether or not the show recovers.

Keep in mind that this here is an Audience Reaction Trope and some of these series may have actually Jumped the Shark. The point of this trope is noting how suddenly and over-dramatically this call will be made and the lack of actual shark jumping the object of the viewer's complaint actually has. And for that matter, don't list examples where you think it has genuinely stopped being good.

Not be confused with Defiled Forever, though that may be a cause of this.

Sub pages noting when people complain a show is ruined:

You've decided to become a Troper? TVTROPES HAS RUINED YOUR LIFE FOREVER!