Get a Hold of Yourself, Man! 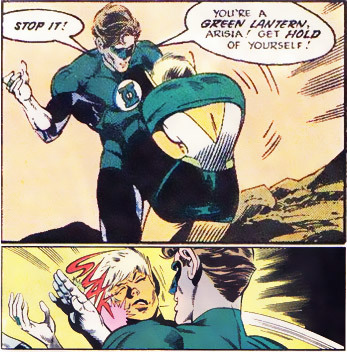 As the Good Book Says... "Turn the other cheek".
"When a man strays from the right path, a kind man needs the courage to raise his fist and correct him."
— Jamil Neate, After War Gundam X
Advertisement:

The hero has just gone off the deep end under stress. Proving himself to be Not So Above It All, he grows increasingly hysterical, mean, unresponsive or (w)angsty, at a time when his team needs his unaffected ability the most. How do you fix him?

His Sidekick, Distaff Counterpart, right-hand man or woman, love interest (specially the ladies of the Tsundere or Broken Bird kind) or superior jolts him back to his senses with a sharp slap, a straight-up punch to the face, a shake to both shoulders or an Angry Collar Grab, and occasionally a retort for him to get his head out of his ass already (see entry title for the archetypal one). The shame-faced hero says something along the lines of "Thanks. I needed that." Less appreciatively he'll say "Not even my dad hits me!", but will eventually calm down.

Might overlap with the Dope Slap; also compare Zen Slap, when a Zen master does this to their disciple for the purpose of enlightening them. May also be used on a Hysterical Woman — even by a man. Similar in spirit, but not so much in execution, to Don't Make Me Take My Belt Off!. Compare with Quit Your Whining, in which it is verbal, but this trope can be used to spice it up. If you need to lay a full-on beating to snap someone out of it, see Beat the Curse Out of Him. A form of Tough Love.