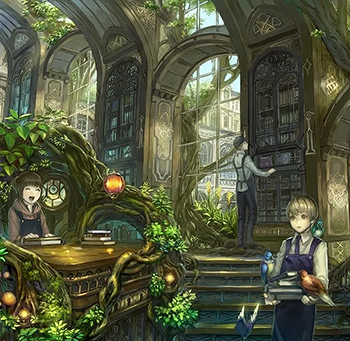 Don't worry, the birds won't eat bookworms.
"I have always imagined that Paradise will be a kind of library."
— Jorge Luis Borges
Advertisement:

A magical library is a mystical library that is explicitly magical or is infused with magic. These libraries tend to be small and hidden in a remote area. They usually contain dangerous and forbidden spells, arcane Spell Books and priceless Ancient Artifacts and MacGuffins. They also may have supernatural books such as Tomes of Prophecy and Fate and Tome of Eldritch Lore. The libraries also might be home to monsters, creatures and Magic Librarians that are there to protect the library. The library might be quite old, and may even be as old as the universe itself.

Because these things are valuable - and it would be disastrous if these items were to fall into the wrong hands - these libraries are usually almost impossible to find without a special map, not to mention being well-guarded. The objects that allow the library's location to be found are sometimes scattered across the world. The heroes and villains alike might have to engage in a Gotta Catch Them All plot in order to have access to the library's valuable information.

If the magical library is easily accessible for most people, it's usually part of a school. The protagonists may regularly visit the school library to find out how to solve a problem or gain information about the current plot. Characters that are a bit more rebellious might simply steal from the library instead, setting up the main conflict.

These type of libraries tend to appear mostly in fantasy, Urban Fantasy and works that have a Fantasy Kitchen Sink.

The library in the Boiling Isles is obviously magical because of the setting. The Wailing Star makes it more magical by making all the books glow green and project their contents when opened.

The library in the Boiling Isles is obviously magical because of the setting. The Wailing Star makes it more magical by making all the books glow green and project their contents when opened.