Light Novel / In Another World with My Smartphone 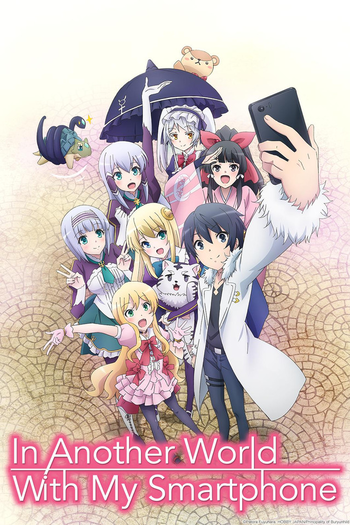 Touya Mochizuki is accidentally struck by lightning and killed by God. To make up for it, God gives Touya the chance to be reborn in a magical world and also offers him a special favor: Touya asks that he be allowed to bring his Smartphone with him. God accepts Touya's choice and even gives him magic powers as a further apology for killing him. And so begin Touya's adventures in the new world, where he befriends many people, solves quests and comes across some interesting secrets and mysteries.

In Another World With My Smartphone (異世界はスマートフォンとともに Isekai wa Smartphone to Tomo ni.) is a web novel series written by Patora Fuyuhara, published as a light novel with illustrations by Eiji Usatsuka under the Hobby Japan imprint since 2015 and has so far spawned 21 volumes.

An Animated Adaptation by Production Reed premiered in July 11, 2017. It is available for legal streaming with subtitles on Crunchyroll here

Fans of only the anime and manga must beware of spoilers.

In Another World With My Smartphone contains examples of:

Alternative Title(s): Isekai Wa Smartphone To Tomo Ni, In Another World With My Smartphone