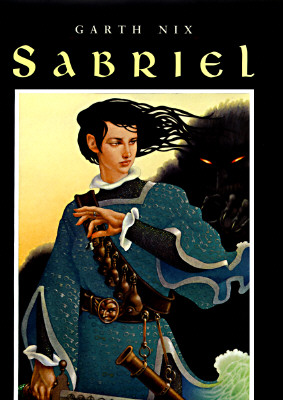 Bells have never looked so awesome.
"Does the walker choose the path, or the path the walker?"
— The Book of the Dead
"Your work?" asked the man, shivering a little, though it was no longer cold.
"Yes," said Abhorsen. "I am a necromancer, but not of the common kind. Where others of the art raise the Dead, I lay them back to rest. And those that will not rest, I bind. Or try to. I am Abhorsen."
— from the prologue of Sabriel
Advertisement:

Set in a world sharply divided into the Old Kingdom, where magic rules, and the Southern Nations, where science is law, the Old Kingdom series revolves mostly around the conflict between two varieties of magic — Charter and Free, which correspond roughly to the traditional alignments of Law and Chaos. Charter Magic is defined by the Charter, a runic language, which gives structure and purpose to sorcery to make it a beneficial and constructive force; Free Magic is wild, uncontrolled and given to corruption and wanton destruction. Poised between the two is the Abhorsen, who partakes of both to defend the people of the Charter from the Dead and other monsters that Free Magic and its servants spawn in order to work their wills.

The first book tells the story of Sabriel, daughter of the Abhorsen, who discovers that since something bad has happened to her father, she must protect the world from the hordes of undead that threaten it. The second and third are set some years later and follow several protagonists — the eponymous Lirael, a librarian, and Sam, Sabriel's son — as they attempt to prevent a great evil from escaping its prison.

Although parts of the setting bear a superficial similarity to the "stock" medieval fantasy, Nix quickly heads off into new territory, bringing a unique and different flavor to what might have otherwise been yet another fantasy Cliché Storm. The magic systems used in the book are radically different from the expected and contribute significantly to its originality. One of the more interesting touches is the presence of the more advanced technological lands to the south of the Old Kingdom — in particular Ancelstierre, home to many of the characters, which comes across much like England circa 1910-1920.