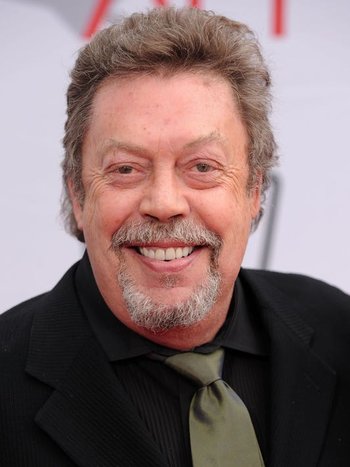 You can fairly judge a man based on what movie he knows Tim Curry from.
"I still find it quite easy to find my way into a child's imagination. We're all Peter Pan ourselves in some respects. Everybody should keep some grip on childhood, even as a grownup."
Advertisement:

Timothy James Curry (born April 19, 1946, in Grappenhall, England) is an English actor and singer. With a handful of exceptions, every character he's ever played is a) evil, b) dead by the end of the film, or c) both. Has played Satan a couple of times, most spectacularly in Ridley Scott's Legend (1985). (And he topped even that with Pennywise the Dancing Clown in the TV miniseries It (1990).) And it'd probably be easier to list the cartoons that he hasn't voiced a villain in.

His first on-screen role was that of Dr. Frank-N-Furter in The Rocky Horror Picture Show (carrying on from the original stage production), which rather set the tone for his later roles. He even recorded a few rock albums in the late 1970s/early 1980s in the wake of its success, and he's done more than a few musicals since, usually animated ones. He's British, which is also convenient because most of the heroes he plays against have American accents (even in movies such as The Three Musketeers, which is set in France, or FernGully, which is set in an Australian rainforest. Even the goanna in that movie managed to be from South-Central L.A.). He played Captain James Hook in the TV series Peter Pan & the Pirates, a role for which he won the Daytime Emmy for Outstanding Performer in a Children's Series.

Tim Curry has also done extensive voice work for video games; a memorable (live-action) role is as Premier Anatoly Cherdenko in Command & Conquer: Red Alert 3, in which he once again plays a Magnificent Evil Deadpan Snarking Bastard... but strangely not a British one, though it doesn't make the role any less effective or awesome.

Sports a Beard of Evil, for convenience.

A little known fact is that Tim Curry was originally cast to be the Joker for Batman: The Animated Series, but was replaced by Mark Hamill. The DVD Commentary stated that Curry was too creepy (keep in mind his performance as Pennywise) and the role was threatening to damage his throat.note Allegedly, a recording of Curry's laugh for the Joker survives in the Dream Sequence in "The Forgotten" He was also the actor chosen to play the Doctor in the 1996 TV movie, but he suggested Paul McGann for the role instead due to a scheduling conflict.

He returned to the forefront for his work in The Wild Thornberrys as Nigel Thornberry (who for once is not an Evil Brit), due to the various memes surrounding the character.

For his lovable villain roles, it is not surprising that he'd be considered to be the Anglo-American counterpart of Norio Wakamoto (or vice versa).

His voice is rather distinctive in the animation roles he's performed

, but not always. Darkwing Duck fans might be surprised to learn that the Spanish (or is it Russian?) accented Taurus Bulba is actually Curry. Nor does his role as Zimbo (the one-legged fly who is often seen around the Snorch) on Ahhh! Real Monsters, which he, according to an interview, based on an "Argentinian gigolo".

Curry's acting career has slowed down considerably after a near-fatal stroke in 2012 left him wheelchair-bound, with some facial paralysis, and only able to speak slowly and deliberately. Despite his paralysis gradually worsening (though his speech has recovered a bit since then), he's managed to continue acting and make public appearances, most famously as the Criminologist in the 2016 TV movie remake of The Rocky Horror Picture Show.

In person, Tim Curry has appeared in:

Tim Curry's voice has appeared in:

Tim Curry is known for these particular tropes:

Troper! You've made it to the end of my page. For that, I'm sending you all the Video Examples of me, but I won't let you have the satisfaction of catching me. I'm escaping to the ONE PLACE THAT HASN'T BEEN CORRUPTED BY TROPES... SPACE!!
Feedback

Example of:
Everybody Did It