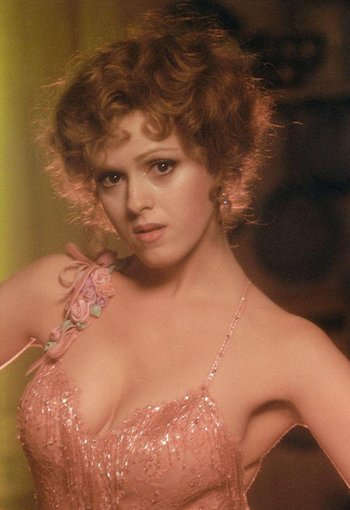 Bernadette Peters (born February 28, 1948 in New York City, New York) is an American actress, singer, and children's book author. Over the course of a career that has spanned five decades, she has starred in musical theater, film and television, as well as performing in solo concerts and recordings. She is one of the most critically acclaimed Broadway performers, having received nominations for seven Tony Awards, winning two (plus an honorary award), and nine Drama Desk Awards, winning three. Four of the Broadway cast albums on which she has starred have won Grammy Awards.

Regarded by many as the foremost interpreter of the works of Stephen Sondheim, Peters is particularly noted for her roles on the Broadway stage, including musicals Mack and Mabel, Sunday in the Park with George, Song and Dance, Into the Woods, Annie Get Your Gun, The Goodbye Girl, Gypsy and Hello, Dolly!.

Tropes that apply to Bernadette Peters include: