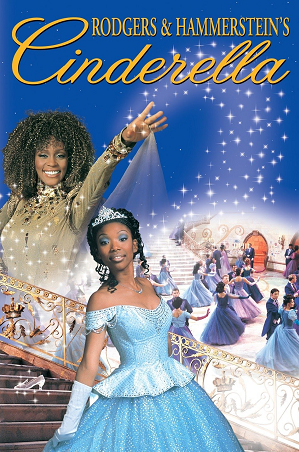 "You didn't need my help. You just thought you did. Believe in yourself, Cinderella, and trust him to love you as you really are."
— Fairy Godmother
Advertisement:

The Wonderful World of Disney's 1997 film adaptation of Cinderella (Rodgers and Hammerstein), which was in turn an adaptation of the fairy tale of the same name. It starred Brandy as the title character, along with Whitney Houston as both an executive producer and the fairy godmother. This version had a slightly more modern feel to it, and featured a multiracial, colorblind cast, along with an added character named Lionel and three other Richard Rodgers songs added to the score.

The film roughly follows the plot of the fairy tale and the musical. With the help of her fairy godmother, the put-upon Cinderella defies her cruel stepmother (Bernadette Peters) to attend a ball, where Prince Christopher (Paolo Montalban) is seeking a bride at the behest of his parents (Victor Garber and Whoopi Goldberg). Having previously run into Cinderella at the marketplace, Christopher feels that the beauteous young woman he is drawn to is familiar and wants to get to know her. But the Fairy Godmother's spell only lasts until midnight, and so Cinderella flees the scene, leaving only a single glass slipper...