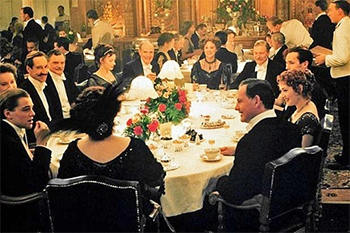 Either at an expensive restaurant, at an expensive club or a dinner at the Richies'. Very common in princess training or rags to riches. Played for comedy or drama. For instance, if someone is dispensing Sacred Hospitality, it will likely include a Fancy Dinner.

Expect one of the following:

A common variation is the "heroic feast" in which a given chieftain gives a feast to a large number of badass people. The food is usually badass style food such as mead and roast oxen. While they eat a bard will of course sing of famous deeds and heroes.

After(or before) dinner might be the time for Dances and Balls.