Tampering with Food and Drink 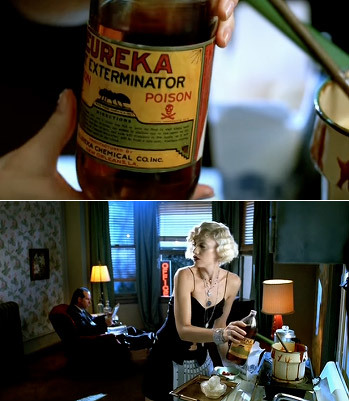 "Ah ha ha, I put broken glass in your dinner, dear
It's only getting worse from here."
— King Diamond, "More Than Pain"
Advertisement:

The act of sneaking inedible or dangerous objects, such as glass, poison, drugs, etc., into an item of food or drink, with the hope that it kills/harms whoever has the misfortune to consume it. As such, it also covers deliberately adding an otherwise harmless ingredient to which the intended recipient is known to be allergic.

The non-lethal version of food tampering would be putting a love potion, sleeping potion/drug, etc. in food or more commonly, drinks; also known as Slipping a Mickey. Another less fatal prank is switching the victim's usual drink with Blazing Inferno Hellfire Sauce or Gargle Blaster. A Laxative Prank is also fairly common. Well-intentioned tampering can also administer a remedy to a patient either unaware of their ailment or unwilling to take the cure. Attempting to do this to several different people at once can overlap with One Dose Fits All.

A variant of this trope is Medication Tampering.

If the perpetrator is unlucky, his plans may be thwarted by a Poisoned Chalice Switcheroo.

A character who suspects that the trope is going to be played on him might react with a Discreet Drink Disposal or Discreet Dining Disposal.

Compare Revenge Is a Dish Best Served, when someone puts something gross (but non-fatal) in food or drink to get back at someone (usually a grumpy or bossy customer). Clean Food, Poisoned Fork is when the means of eating the food is tampered for the same effect. Tainted Tobacco is where the poisoner tampers with the victim's smoking material rather than their food.

Compare the larger scale Water Source Tampering, usually perpetrated by conspiracies and such.

Razor Apples and Slipping a Mickey overlap with this trope. The Master Poisoner is highly likely to practice this art. Lethal versions are often Tricked to Death.