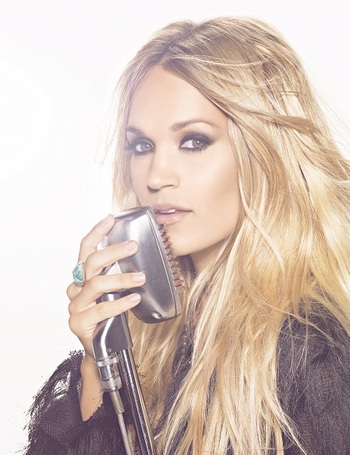 Carrie, you're not just the girl to beat, you're the person to beat. I'm going to make a prediction that not only will you win this show, you will sell more records than any other previous Idol winner.
—Simon Cowell
Influences:
Advertisement:

Carrie Marie Underwood (born March 10, 1983) is an American country singer, known best for her Signature Song "Before He Cheats" and for being in possession of a wickedly stellar set of pipes.

At 22, Carrie — a country farm girl from Checotah, Oklahoma — auditioned for the fourth American Idol with Bonnie Raitt's "I Can't Make You Love Me." Although the judges were impressed, it wasn't until Underwood sang Heart's "Alone" that her true potential appeared. She won the final over Bo Bice and immediately proved Simon right, becoming a true star (like Kelly Clarkson before her) and taking the Country Music world by storm. She has since won multiple Grammy Awards and set a yet-to-be-surpassed benchmark for Idol success. Her albums have consistently produced strong sales, with almost all of her singles to date having reached top 5 on the major country music charts.

In 2017, Underwood moved from original label Arista Records Nashville to Capitol Records. That same year, she suffered a bad fall on the front steps of her home, resulting in a broken wrist and several facial stitches that caused a change in her appearance and a withdrawal from the public eye for several months. Within the same timeframe, she also suffered three miscarriages. These things culminated in the 2018 release of her first Capitol album, Cry Pretty, meant to be a more personal and emotional record than any of her previous. She's gotten better; her follow-up (excluding her Christmas and gospel albums) Denim & Rhinestones is decidedly Lighter and Softer.

She also played the role of Maria in NBC's live production of The Sound of Music, to, shall we say, more mixed reviews.

Maybe next time he'll think before he tropes: