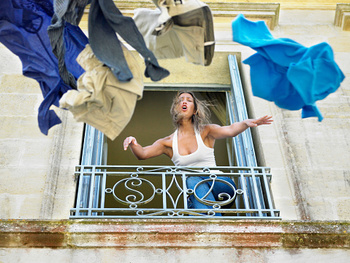 Kevin: How do you know when a relationship is over?
Matt: Well, all my clothes on the front lawn usually does it for me.
— Two of a Kind
Advertisement:

It's a scenario when a couple is breaking up. The man is leaving his wife or girlfriend. Perhaps he has cheated on her, and the woman is showing both her ire and her desire to be rid of this man and all memory of his presence in her life by throwing his belongings out of the window of the dwelling they shared up until she discovered the infidelity or other dealbreaking thing he's done. This is usually accompanied by the woman screaming or faux-calmly berating him for what he's done, or delivering the litany of reasons he's being dumped along with his belongings.

For maximum amusement factor, the window is usually at least on the second story of a building (Tossing stuff out the first floor window isn't funny; tossing stuff out a higher window could be dangerous to passerby, and not just humiliating and inconvenient for the cheating boyfriend). The hapless guy's reaction tends to run:

There are bonus points of amusement for the hapless man getting beaned with his own prized possessions, like trophies or other sports memorabilia.

Darker, less humorous versions of this trope tend to have the woman taking fire (see Break-Up Bonfire) or razors to the cheater's belongings. This variant does get used with men as well as women, when a divorcing husband trashes his own stuff rather than let his wife's lawyers take it away from him.

Note that in Real Life being upset with your significant other does not give you the right to damage their property or evict them from their home; Carrie Underwood lyrics to the contrary notwithstanding.note Point of fact, this, as well as a number of other tropes that often appear in romantic comedies, is in fact a crime for which you can be prosecuted. So, technically, you can go ahead and break their shit, as long as it's worth it to you.

Surprisingly, this one is often used in commercials. Especially in Mexican commercials, since the phrase "tirar la casa por la ventana" (literally, "defenestrating the house") means "throwing a huge party".

Sheena Easton, from her "Almost Over You" video, throwing her cheating boyfriend's arcade machine (Most likely "Defender") off the balcony.

Sheena Easton, from her "Almost Over You" video, throwing her cheating boyfriend's arcade machine (Most likely "Defender") off the balcony.