Literature / How NOT to Write a Novel 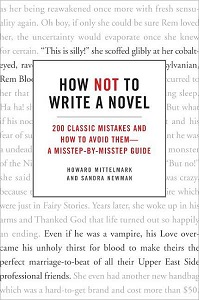 "We do not propose any rules; we offer observations. 'No right on red' is a rule. 'Driving at high speed toward a brick wall usually ends badly' is an observation."
Advertisement:

How NOT to Write a Novel is a 2008 self-help Book on Trope by Howard Mittelmark and Sandra Newman. It deals a lot with tropes (and improper use of them), and even contains some tropes itself.

The book, naturally, is about how not to write a novel. It is probably the only self-help book that you'll want to read over and over, because it's actually amusing to read. It includes many "samples" (written by the authors, though they claim they're based on submissions they received as editors) of writing that range from "good prose, but used tropes vitally wrong" to "OhgodIcan'tlookbutIhaveto."