You may be looking for RocketMan, a 1997 sci-fi comedy directed by Stuart Gillard. 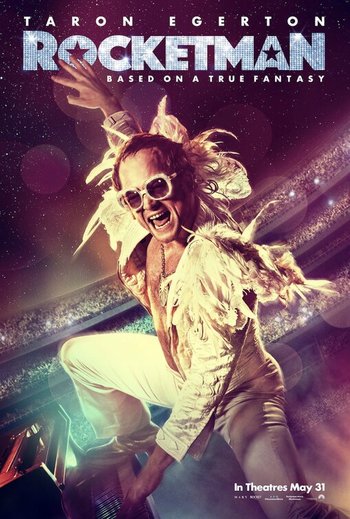 "You could be the bestselling artist in America if you desire."
"There are moments in a rock star's life that define who he is. Where there is darkness there is now you, and it's going to be a wild ride."
— John Reid
Advertisement:

Rocketman is a 2019 biographical jukebox musical directed by Dexter Fletcher (who finished the filming of Bohemian Rhapsody) and starring Taron Egerton about the life and career of Reginald Kenneth Dwight, better known as Elton John. Elton himself and his husband David Furnish serve as executive producers under their company, Rocket Pictures.

The film tracks Elton's rise to fame as he struggles with his sexuality and substance abuse.

Co-starring in the film are Jamie Bell as Elton's songwriting partner Bernie Taupin, Bryce Dallas Howard as his mother Sheila Eileen, Richard Madden as his manager (and lover) John Reid.

Elton John: Maybe I should have tried to be more ordinary.
Bernie Taupin: You were never ordinary.
Feedback