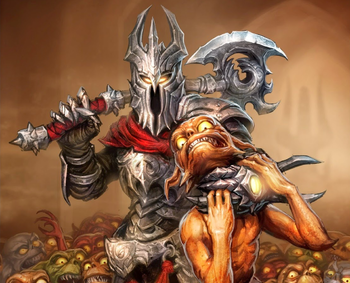 As you can see, being Overlord to such a band of minions requires a kind and gentle touch.
"Every day, the sharks are fed at least two employees who had incurred the displeasure of the president."
— Garrison Keillor, A Prairie Home Companion
Advertisement:

An Evil Overlord, Diabolical Mastermind, Corrupt Corporate Executive, or other villain or Jerkass character establishes just how bad they are by callously mistreating their own henchmen, sometimes outright maiming or killing them — not just for failures that weren't their fault, but simply because somebody blew their nose too noisily; or to remind them who's the biggest, baddest son-of-a-bitch there; or because they were in a bad mood; or in many cases, absolutely no reason whatsoever beyond exercising dominance and/or entertaining themselves.

Why anyone goes on working for them is unknown. Their behavior sometimes breeds usurpers and/or annoys/scares off their mooks into joining the winning (or at least less dangerous) side, but sometimes it has no effect... and sometimes you're left wondering why anyone would work for them in the first place. They may have simply Signed Up for the Dental, though often it's just that they are even more terrified of what the boss would do to them if they dared to quit. Of course, this may be one reason why villains don't win nearly as often as heroes do; after all, a company/boss that mistreats their employees doesn't tend to be as successful as one that respects them.

Never ever ever try With Due Respect on a Bad Boss — many of them do not take criticism well, if at all.

The Weasel Co-Worker has an unusually high chance of getting away with his lies under him, which may be why he works for him.

In some cases it's not the Big Bad, but a more vague force of evil that slaughters its own. For those cases see Artifact of Death.

Not related to That One Boss, or to any other Boss Battle trope. Contrast with Benevolent Boss and Mean Boss.

He treats his workers terribly, even mocking the foreman for losing a game of checkers to his pet monkey.

He treats his workers terribly, even mocking the foreman for losing a game of checkers to his pet monkey.