Spoilers for this film, and the previous Toy Story films, will be unmarked. You Have Been Warned. 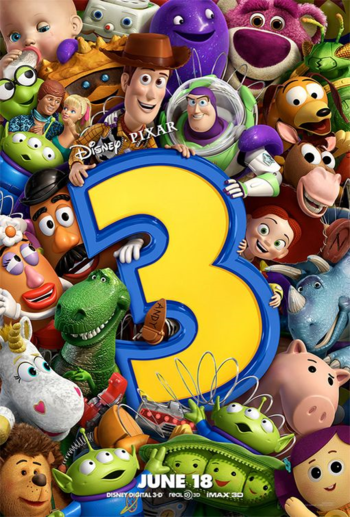 No toy gets left behind.
"Through every yard sale, every spring cleaning, Andy held on to us! He must care about us or we wouldn't be here."
— Woody
Advertisement:

Toy Story 3 is the 2010 sequel to Toy Story 2. Andy—now almost 18—is getting ready for college, and the plot follows the adventures of Andy's childhood toys as they're accidentally donated to a preschool/daycare center for a new generation of kids to enjoy, much to the toys' dismay. It is in this film that the Myth Arc of the series - which concerns the life of a toy - comes to a close, and the characters accept that their time as Andy's toys has come to an end, but it also paves the way for their future.

The film was known for a staggering amount of time spent in Development Hell during the 2000s, and for a time, it looked like this film would never materialize. Disney attempted to produce a third Toy Story film with an in-house studio as opposed to Pixar,note The plot would have involved a recall of Buzz Lightyear toys but it all worked out after Disney's acquisition of Pixar. Toy Story 3 would be released almost eleven years after the second film, and fifteen years following the original.

Toy Story 3 is notable for being considerably Darker and Edgier than the previous two films. The main cast of the films was largely reunited, bar the late Jim Varney and Joe Ranft. Varney was replaced by his old friend Blake Clark, while Ranft's characters and numerous others were written out of the story. Toy Story 3 also has the honor of being the third animated film to be nominated for Best Picture at the Academy Awards, after Beauty and the Beast and Pixar predecessor film Up, and was the first animated film to exceed the one billion dollar mark at the worldwide box office.

The film was followed by several shorts, Toy Story of Terror!, Toy Story That Time Forgot and Toy Story Toons. In late 2014, Pixar announced Toy Story 4, which was eventually released in Summer 2019.

This film played in theaters along with the Pixar short Day & Night.

open/close all folders
#-A
B
C
D
E
F
G
H
I
J-K
L
M
N
O-P
Q-R
S
T-U
V-Z
Whatever happens, we'll always be together.
For infinity and beyond.
— Woody and Buzz.
Feedback

Example of:
Save the Villain