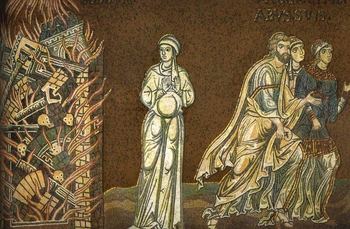 A look so long, she never stopped looking.
"As he walked into the blinding golden light, he turned and looked back over his shoulder. He smiled at me … I never saw Superman again."
— Lois Lane, Whatever Happened to the Man of Tomorrow?
Advertisement:

The characters have lived in their home for many years, perhaps even growing up there. But, unfortunately, plot happens, forcing them to leave the place, and they may not see it again. Maybe it's burning down, or perhaps the change is political. Maybe they have decided to move on their own volition. Regardless, the feels are deep...

As the character is leaving, they will take a moment to glance around, saying goodbye to their home, their possessions, and/or their past. They are being forced along by what is, but in this brief moment they cling to what was one final time. And then they leave.

May be followed by Watching Troy Burn.

Sometimes people will say goodbye to someone as well with one last look, especially dads who are disappearing or your loved ones who leave you. May be blended with Affectionate Gesture to the Head and other Body Language tropes, especially if the moment is shared by friends or family.

This trope very often plays a vital role in a Grand Finale of any genre.

Woody and Buzz get the signal that Andy's family is about to move.

Woody and Buzz get the signal that Andy's family is about to move.