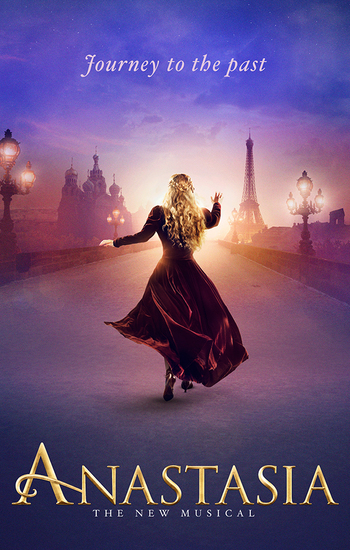 The journey to the past begins.
On the wind, 'cross the sea,
Hear this song and remember
Soon you'll be home with me
Once upon a December
Advertisement:

The Screen-to-Stage Adaptation of Don Bluth's 1997 animated film Anastasia (although it should be mentioned that Bluth was not involved with it). Like its predecessor, the musical takes elements from real Russian history, a 1956 Ingrid Bergman film, and the animated fairy tale to tell the legend of the Grand Duchess Anastasia Nikolaevna Romanova. After the death of the imperial family in 1918, legends swirled for decades that the young princess might have survived. What if those rumors were true?

For 300 years, the Romanov family ruled imperial Russia. Anastasia, along with her sisters and brother, enjoyed the grandeur of life at court—although only Anastasia had a special bond with her grandmother, the Dowager Empress. But in 1917, the family is overthrown and imprisoned by revolutionaries. All of the Romanovs were killed, or so it seemed.

A decade later, twenty-eight-year-old Anya is a street sweeper in St. Petersburg, suffering from amnesia since she was eighteen. Her terrified reaction to the sounds of a backfiring car draws the kindness of a Chekist officer, Gleb, whose father was among those who imprisoned and killed the Romanovs. Armed with only the bits of knowledge gleaned from her strange dreams, Anya is determined to go to Paris in search of answers. She joins up with a sarcastic young forger and con man named Dmitry and his genial partner in crime, Vlad, who are seeking a young woman to impersonate the missing princess in order to collect the reward from the Dowager Empress. Despite Dmitry's initial misgivings, the pair are able to convince Anya that she might, perhaps, be the Grand Duchess Anastasia, and offer to educate her and bring her to Paris to find out the truth—failing to mention their true scheme.

As the trio moves closer to Paris and the Dowager, Anya's memories begin resurfacing in occasional, sometimes disturbing, ways. Meanwhile, Gleb is under orders to pursue this rumored Anastasia and either make an example of her if she's an imposter or execute her if she is truly a Romanov- an assignment that brings him increasing grief considering he's plagued by inconveniently romantic feelings for Anya himself. And there's something blossoming between Anya and Dmitry...

The musical places more emphasis on the culture, history, and politics of this era in Europe than the animated film's magical fairy tale. Most notably, the entire magical plot involving Rasputin and his demonic minions has been excised. The show opened in Hartford, Connecticut in the spring of 2016, and eventually opened on Broadway in April 2017 with Christy Altomare in the title role.