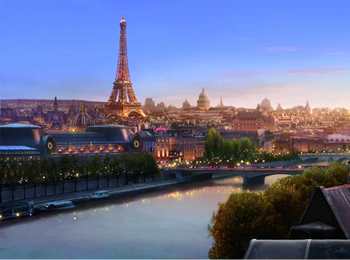 "Look at France, oh god, look at France."
"If you are lucky enough to have lived in Paris as a young man, then wherever you go for the rest of your life, it stays with you, for Paris is a moveable feast."
— Ernest Hemingway, A Moveable Feast
Advertisement:

Paris, one of the great cities of the world. With its large, wide boulevards, the beautiful Napoleon-era architecture of the central arrondissements, the rich, multicolored culture of the Arabs and Africans from the surrounding banlieues, the fast-paced acrobats of Le Parkour that hail from the southern suburb of Évry, the brilliant and captivating Oriental neighborhood of Olympiades, the iconic entrances and stations of Le Métropolitain and the shiny, futuristic skyline of the skyscrapers gathered around the Bibliothèque nationale

Uh, what? Does Paris really have all that? Oh là là, we thought Paris was the Eiffel Tower, the Arc de Triomphe, and The Louvre (with its convenient supply of priceless, world-famous works of art) looming over bistros, cafés, art galleries and super-chic shops in Avenue des Champs-Élysées and the Rue de la Paix, Starving Artists in the Latin Quarter (or, during La Belle Epoque, deranged painters in Montmartre), the romantic old bridges over the River Seine, the gaudy music shows at the Moulin Rouge and Folies Bergère, and stuff like street mimes on every corner, with accordion music or/and Édith Piaf songs playing in the background, and snooty French people (the custom of men kissing each other on the cheek may be exploited for Ho Yay) smoking cigarettes and wearing berets, striped shirts and scarves while they carry around baguettes under their arms. And all the buildings are in the style of Haussmann's 19th century urban renewal, right...?

Tragic romances set here tend to end with the corpse of some jilted lover floating in the Seine. Also expect any Japanese Tourist to get their disappointment that the city isn't as glamorous as they thought.

A place to Have a Gay Old Time. Not to Be Confused with gaily paring (cutting, skinning) things, or paring gays.

Belleville is effectively a satirized version of Paris.

Belleville is effectively a satirized version of Paris.