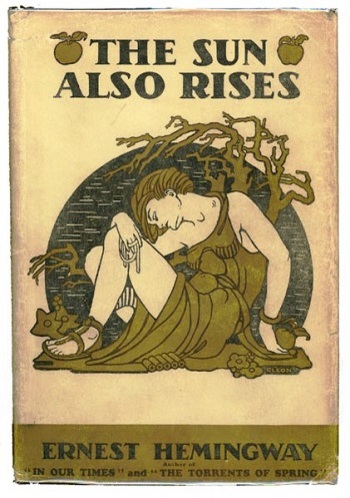 The Sun Also Rises is a 1926 novel by Ernest Hemingway.

Jake Barnes, American veteran of World War I, drifts around Paris, meeting random people and disillusioned with the world around him. He is in love with the lady Brett Ashley, but then so is everyone else. He is also followed around by Robert Cohn, a Jew with a chip on his shoulder and a weak personality. Jake learns that Cohn is infatuated with Brett and that she slept with him. Jake goes fishing with his friend Bill Gorton in Burguete, and then rejoins Cohn, Brett and Brett's fiancé Mike Campbell in Pamplona for the annual Running of the Bulls. Brett seduces an up-and-coming bullfighter, the 19-year-old Pedro Romero, whose genuine skill puts the others to shame. Cohn gets pissed off, beats up Mike and Jake, and then Romero, and then flees the country. Romero, despite having gotten quite beat up, fights flawlessly in the ring, and then scampers off to Madrid with Brett. Soon, however, Brett telegrams Jake and asks him to retrieve her, as she has forced Romero to dump her for fear of ruining him. Brett sighs regretfully that she and Jake would've been so good together, and Jake replies—with just a tinge of cynicism—that it's nice to think so. The end.

Encapsulated the experience of the "Lost Generation," who had seen The Edwardian Era get mowed down in droves by the Great War. Jake in particular carries the Symbolism Ball: he sustained an injury in the war that makes him unable to boner, representing pre-war masculinity being out of place in this new World Half Empty. Cohn, on the other hand, still clings to those old values, which is why nobody likes him. Meanwhile, Brett, whose sexually liberated exterior hides a history of Domestic Abuse, furthers the emasculation imagery as a Femme Fatale who uses sex to protect herself... But maybe we're starting to read too much into this. Ask the Hemingway scholars if we are.

A film adaptation was made in 1957, directed by Henry King and starring Tyrone Power as Jake Barnes, Ava Gardner as Brett Ashley, Mel Ferrer as Robert Cohn, and Errol Flynn as Mike Campbell. (Hemingway disliked it so much he walked out of the theater after 25 minutes.) There was also a TV miniseries adaptation on NBC in 1984, starring Hart Bochner as Jake, Jane Seymour as Brett, Robert Carradine as Cohn, and Ian Charleson as Campbell.

The novel entered the US public domain on January 1, 2022.

Not to be confused with Something Else Also Rises. Especially given Jake's injury.