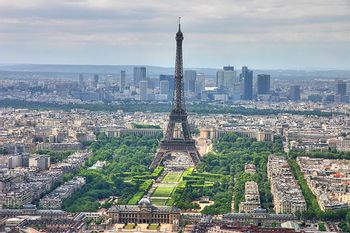 Where good Americans go when they die.
"If you are lucky enough to have lived in Paris as a young man, then wherever you go for the rest of your life, it stays with you, for Paris is a moveable feast."
— Ernest Hemingway
Advertisement:

Paris, the capital of France. With All Due Respect to Shattrath City, this is the original City of Light.

In its administrative area (the 75 postal area, split up into twenty numbered administrative districts called "arrondissements", although these sort of things exist all over France), also known as "downtown Paris", the population is only about 2 million, but the total urban sprawl has a population of over 12.5 million (making it the largest urban area in The European Union and the second-largest in Europe, after Moscow) and represents 18% of the French population. The region roughly in a 50 km radius around Paris is known as Ile-de-Francenote "Island of France" in French, despite its distance from the sea - possibly due to being surrounded by rivers, and its inhabitants are called "Franciliens" - although French people tend to refer to them all as Parisians.

It has four ring roads (London only has two), the inner most being the division between the main city and the very poor suburbs... Or the very rich: the GDP per capita of the "Hauts-de-Seine" (the rich suburbs to the North West of Paris) is close to the GDP per capita of Washington, D.C., while the GDP per Capita of some parts of the "Seine-Saint-Denis" (the poorer eastern suburbs) is closer to that of parts of eastern Europe. This is a very old distinction; western Paris has been home to its better-off inhabitants for generations (as any account of the 1789, 1830, and 1848 revolutions can tell you). Still, you can go from the posher parts of the city to the poorer ones in 40 minutes by Métro.

Some other places of interest:

The city was pretty much untouched by the two world wars — the Germans only got into shelling range of the suburbs in the first, Paris surrendered in 1940 to avoid its destruction, the German commander surrendered it in 1944 against Adolf Hitler's orders to destroy it if he couldn't defend it, and nobody wanted to bomb the place.

Also famous about Paris is its incredible mass transit system, which includes the iconic Le Métropolitain as well as other lesser known but equally functional networks. note Unless you are in a wheelchair, in which case it isn't so incredible.

Despite all of the above, Paris has been suffering some backlash in the recent years due to its legendary traffic and dirt issues, dog droppings and cigarette butts being the main offenders. The city has however taken heed of the complaints and is working to improve the current state of the city by both transforming several streets and roundabouts into parks and footpaths, while at the same time promoting the use of public transit, walking and other alternative means of transportation (such as car-sharing or cycling) while clamping down on incivilities such as littering, taking a page or two out of Singapore's book on the matter.

Of note is the future Grand Paris project, aiming to turn the City of Light into one of the major global cities

by giving Paris and the border cities a common framework and internal organization, with talks of a fusion of the cities in the future. While absorbing chunks of or whole régions is only a long-term dream for now, the potential supercity would represent five times the actual area of Moscow. Yeah, it's that big.

See Gay Paree for Paris as a trope in modern fiction, as opposed to the boring facts.

Alternative Title(s): The City Of Light