Film / The Sorrow and the Pity 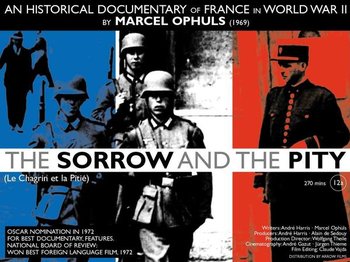 "Collaboration is 'give me your watch, I'll give you the time'."
Advertisement:

The Sorrow and the Pity is a 1969 film directed by Marcel Ophuls.

It is a documentary recounting the history of France's defeat in World War II and the following four years in which France was occupied by the Germans and governed by the Nazi-friendly "Vichy France" regime of Marshal Phillipe Petain. Ophuls centers his film around the town of Clermont-Ferrand in Auvergne. Part I, "The Collapse", prominently features Pierre Mendes-France, a Resistance leader who joined Charles de Gaulle in Britain, fought against the Germans, and became a prominent post-war politician who was briefly Prime Minister of France. Part II, "The Choice", takes the opposite perspective and features Christian de la Maziere, an aristocratic fascist who fought for Hitler in the French division of the Waffen SS, and who later served a brief prison term.

The overall theme of the film is that the romantic tales of the French Resistance were not the norm, and that in fact, most of the people of France either were indifferent or actively collaborated with the Germans.

Years later, Ophuls would return with Hotel Terminus which deals with the trial of Klaus Barbie, the Nazi official who oversaw operations in Lyon that led to the arrest and death of Jean Moulin, and likewise revisits the memory of Occupation and Resistance.