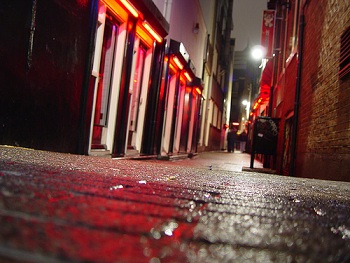 Not always this subdued.
"Lovely ladies, waiting for a bite
Waiting for the customers who only come at night..."
— Les Misérables, "Lovely Ladies"
Advertisement:

An area of strip joints, brothels, and other seedy locales. Very much based on reality - according to one version, the term came from railroad workers leaving their red work lamps outside the businesses they were patronizing when going into town for the evening so that they could be located if they needed to be called back to work on short notice (said lamps frequently being left by brothels and bars).

Generally portrayed in one of three ways in fiction:

The liberal version: Drunk happy people, women waving down from balconies. The protagonist gets to have a good time or gets made fun of for being unable to. The most friendly take on the district.

The pitiful version: Drunks collapsed in the gutter, battered strung-out prostitutes. The protagonist is probably here on business. Possible location in a Wretched Hive. Very common in cop shows and Antihero comics. You're most likely to see this side of the district in the grey light of the morning.

The hostile version: The drunks will pick a fight with you, the women will rob you or knife you in an alley. Like the pitiful version above, possible location in a Wretched Hive. The protagonist is either lost or hopelessly naïve and will be wishing he'd found the liberal version before the end of the night. Also common in cop shows, particularly in the first five minutes when they're showing the soon-to-be victim.

The Lust Ring is one big sex club run row to row with strip clubs, all run by the Demon Prince Asmodeus.

The Lust Ring is one big sex club run row to row with strip clubs, all run by the Demon Prince Asmodeus.