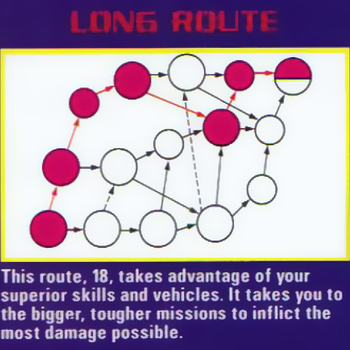 Some video games have a linear set up. Others, usually Visual Novels or games with RPG elements, give the player many choices as to where to go and what to do, and when and what things are done can have an impact on how the game unfolds, sometimes in huge ways. The Golden Path is the path that will offer the player the best gameplay, story, rewards and/or secrets the game has to offer. The Golden Path usually leads to the Golden Ending in Multiple Endings games, and sometimes is the only way to get there, although this is not always the case. Some single-ending games can have a very rewarding Golden Path, usually by using hidden secrets and story elements. Developers can try to avert the creation of a definitive Golden Path by creating unique content for each possible player choice.

See Guide Dang It! if following this path isn't intuitive or requires the player to do everything in a specific way. Compare 100% Completion for which this path is almost always a necessity, see also Story Branch Favoritism which is one of the biggest causes of this trope.

Has nothing to do with the Dune sequels. Also not to be confused with an in-universe organization in the story of Far Cry 4.