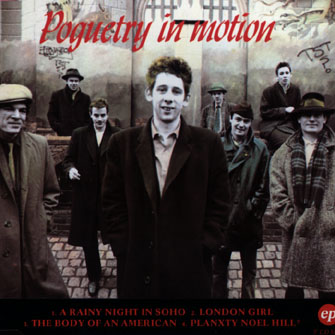 One summer evening, drunk to hell...
"On the first day of March it is raining
It is raining worse than anything that I have ever seen
Stay on the other side of the road 'cause you can never tell
We've a thirst like a gang of devils, we're the boys from the county Hell"
Advertisement:

The Pogues were, and occasionally still are, a Celtic Punk Rock band from London, formed as Pogue Mahone in 1982. After landing several hits in The '80s and early Nineties, they lost lead singer/songwriter Shane MacGowan to personal issues in 1991, and after two more albums the band called it quits in 1996. The band reformed in 2001 and has gone on several tours, but have no plans to record any new material.

They're often noted for awesome songwriting, their mix of traditional folk music with punkish energy, and sadly, the horrible death of guest vocalist Kirsty MacColl and the very public self destruction (and poor dental hygiene) of Shane MacGowan.

Their biggest hit, "Fairytale of New York", has been voted Ireland's and Britain's favourite Christmas song or thereabouts on several occasions, and reliably returns to the charts every December. It was certified a million seller in 2012, 25 years after its original release.

The music of this band provides examples of:

The members of this band provide examples of: