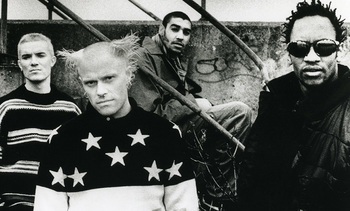 The Prodigy are an Electronic Music group from the UK. Besides being popular in their own right, they were one of the most well-known acts of the "big beat" subgenre during The '90s, along with acts like The Chemical Brothers, The Crystal Method and Fatboy Slim. Formed in 1990, the group's membership has been relatively stable, comprising:

They also had a fourth member, Leeroy Thornhill, who was a dancer and occasionally played keyboards live, but he left in 2000.

The Prodigy's early material was largely straightforward rave with humorous samples thrown in, as shown by their debut album Experience. While this was a success in the early 1990s and spawned several singles such as "Out of Space" and "Charly", it gave them a reputation as lightweights, attracting derisive nicknames such as "kiddie ravers" and "Toytown techno".

Inspired by the impending passage of the landmark Criminal Justice Act (which cracked down hard on the rave scene in Britain), Howlett threw out all the bright and colourful rave elements in producing their follow-up Music For The Jilted Generation, instead cultivating an angry, heavy sound drawing from techno, breakbeat, and industrial rock. Notably, "Their Law" and "Poison" from this album are clear forerunners to the big beat movement of the late 1990s.

Howlett went so far as to test the waters for his new sound by pre-releasing a couple of the album's tracks under the name Earthbound, which won huge underground approval. The track "Their Law" marked their first collaboration with another artist, in this case being the rock band Pop Will Eat Itself, while "Voodoo People" kept them on the charts.

The group's landmark success finally came with The Fat of the Land in 1997. By this point, Howlett had managed to upgrade his equipment, making the beats heavier and giving the album an overall intense, creepy atmosphere. He also took the rock inclinations shown on Jilted one step further and openly aimed his music at the Alternative Rock audience, bringing Jim Davies from the industrial rock band Pitchshifter to add awesome guitar riffs all over the place, sampling from more rock songs, letting Keith and Maxim add more shouted vocals, and including a straight Cover Version of "Fuel My Fire" by L7. Howlett also put in more outside contributions, bringing in Matt Cameron, Kool Keith, and others.

His gambit worked, as Fat became a massive success in the UK and the US (where it went to #1), spawned several hit singles with Nightmare Fuel-laden videos (for "Smack My Bitch Up", "Breathe", and "Firestarter"), and brought them an audience of rock fans that otherwise didn't really pay attention to electronic music.

There was also controversy involved over the video for "Smack My Bitch Up" (which featured more nudity then any other video up to that point, as well as scenes of violence, drug use, and drunk driving), to the point that MTV refused to air it before midnight. But this turned out to be a case of No Such Thing as Bad Publicity, as the video still won a VMA.

Having enjoyed their time in the spotlight, The Prodigy laid low for a few years; Howlett put out the mix album The Dirtchamber Sessions Vol. 1, Leeroy Thornhill left in 2000, and the group also parted ways with their live guitarist Gizz Butt, but nothing much was heard from their camp for a while. Their next single "Baby's Got a Temper" was released in 2002 to critical disappointment, but warm fan reception.

They finally returned with their next album Always Outnumbered, Never Outgunned in 2004, which was greeted with general disappointment as well. After another four-year pause, the group put out their fifth album Invaders Must Die in 2009, which was noticeably better received than Outnumbered. Their sixth album The Day Is My Enemy followed six years later in 2015, and their seventh No Tourists was released in 2018.

On March 4, 2019, Keith Flint was found dead in his home in Essex. Liam Howlett had the unfortunate task of informing fans that it was ruled a suicide leading to an outpouring of grief and sympathy and bringing mental health issues, especially those of men, back into the spotlight. Despite Flint's passing, Howlett has vowed to continue the band, informing fans he was back in the studio working on new music in August the same year.

Tropes associated with The Prodigy:

"Got a lousy haircut, a really stupid haircut..."