Music / Siouxsie and the Banshees 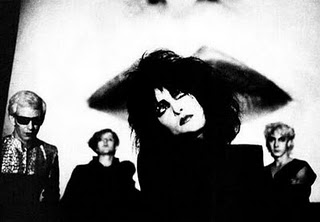 The band at their most normal. note  From L-R: Steven Severin (bass), John McGeoch (guitar, 1980-1982), Siouxsie Sioux (vocals), and Budgie (drums, 1979-1996)
Following the footsteps of a rag doll dance,
we are entranced — Spellbound.
"Spellbound"
Advertisement:

Siouxsie and the Banshees were a British rock band (for a given definition of "rock," anyway) formed in 1976 by vocalist Siouxsie Sioux (born Susan Ballion) and bassist Steven Severin (born Steven John Bailey). While their roots were very much in the Punk Rock scene (the impromptu gig that led to the band's formation featured Sid Vicious on drums) they quickly branched out and began to employ a wide variety of instruments and musical styles. The band's core lineup was rounded out in 1979 by drummer Budgie (born Peter Edward Clarke). Temporary guitarists included Magazine's John McGeoch and The Cure's Robert Smith. The band broke up in 1996, and had a one-off reunion in 2002.

They are regularly cited as being one of the more influential Punk bands in the history of the genre, and they are considered one of the founders of Goth Rock.

Siouxsie and Budgie had a side project, The Creatures, from 1983 to 2005, based more on percussion and influences from various locations: Hawaii, Spain, France and Japan.