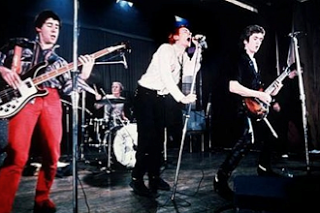 Sex Pistols in 1976. From left to right: Glen Matlock, Paul Cook, Johnny Rotten, and Steve Jones.
"Next to the Sex Pistols, rock and roll and that hall of fame is a piss stain. Your museum. Urine in wine. We're not coming. We're not your monkeys. If you voted for us, hope you noted your reasons. You're anonymous as judges but you're still music industry people. We're not coming. You're not paying attention. Outside the shit-stream is a real Sex Pistol."
—John Lydon, rejecting the band's admission to the Rock and Roll Hall of Fame.
Advertisement:

The Sex Pistols were an English punk rock band formed in London in 1975. Though the band didn't last very long (1975-78), and produced only four singles and one studio album, Never Mind the Bollocks, Here's the Sex Pistols, they were one of the most influential acts in the history of popular music, credited with initiating the punk movement in the United Kingdom, and inspired many later punk and alternative rock musicians. The first incarnation of the Sex Pistols included singer Johnny Rotten, lead guitarist Steve Jones, drummer Paul Cook and bass player Glen Matlock.

The band was put together by Malcolm McLaren. The lead singer Johnny Rotten, real name John Lydon, was discovered after McLaren saw him wearing a Pink Floyd T-shirt he had altered to read "I Hate Pink Floyd," the irony being that Rotten actually didn't hate Pink Floyd; it was just to be nonconformist. (Additionally, McLaren once got pissed at Lydon because in an interview he named some of his musical influences as Can, Van der Graaf Generator and Captain Beefheart, going against the punk image he was trying to cultivate.). Lydon couldn't sing, didn't look particularly like a pop star, but he was a genuine teenager from working class origins who was pretty fed up with a lot of things and now finally got a soapbox to voice his opinions. Fellow band members were brought together and the Sex Pistols were born.

Famously, the band performed to a crowd of approximately 42 people at the Manchester Free Trade Hall in Manchester England in June of 1976. As recounted in the film 24-Hour Party People, each person in the crowd either later formed a band (future members of The Smiths, Joy Division (and by extension New Order), The Fall, The Buzzcocks, Magazine, and Simply Red) or had a pivotal role in shaping that city's music scene (Factory Records founder Tony Wilson and NME journalist Paul Morley). This show alone was proof to the band's aforementioned reaching influence on punk, Post-Punk, New Wave and eventually alternative and indie rock music.

The turning point from band to spectacle is usually considered to be the firing of Glen Matlock (their Beatles-liking, actually capable bassist who co-wrote most of their early songs) and the hiring of Sid Vicious. Notably, Vicious played bass on only one song from their album Never Mind the Bollocks, Here's the Sex Pistols ("Bodies"), with bass duties handled by Jones and (on "Anarchy in the U.K.") Matlock. In fact, he didn't even know how to play his instrument, at least at first. But the band's appeal in general had nothing to do with musicianship, more with their image, attitude and the way they liberated a lot of youngsters to be themselves. They outraged countless people with their Brutal Honesty lyrics aimed at the conformity of Rock and Pop, Anti-Love Song material, swearing and shocking attacks on the British government. "God Save the Queen" was a savage criticism of the British Royal Family and became the alternative anthem during the 25th anniversary of Elizabeth II's crowning. Although the song peaked at No. 2 in the UK chartsnote it's debated in some circles to this day whether the charts were rigged that week, many radio stations refused to play it, even denying its chart position. An entire nation was polarized over the success of this "filthy, degenerate band." One time when Rotten went home after a recording session he was attacked in the street by a bunch of people out of retaliation for "God Save the Queen". Upon arrival at hospital after this incident, police were called to arrest him. The national outrage about the Sex Pistols became so gigantic that many concert halls cancelled their gigs and they had to perform as a surprise act in various cities.

Many future punk rockers got their start as Sex Pistols fans, such as Siouxsie Sioux and Billy Idol. Most of these musicians were part of the media-named, (in)famous "Bromley Contingent," a group of artistically minded youths who hung out in gay clubs and shared a love of Roxy Music and The Velvet Underground, and were, in fact, largely not from Bromley. Malcolm McLaren clothed them in Vivienne Westwood bondage apparel and helped them get from one Pistols show to the next - even France! - to cause controversy. Sid Vicious was initially part of this group; he would be the Banshees' drummer for their first-ever show, as well as try to form his own band, The Flowers of Romance, before becoming a Pistol.

No discussion of the Sex Pistols would be complete without mentioning Malcolm McLaren, their manager, and Nancy Spungen, Vicious' girlfriend. McLaren had a habit of taking the Pistols' ideas for his own, and spreading the myth that the whole group was his Structuralist art project. Spungen was stabbed to death in 1978. Vicious was imprisoned for Spungen's death (whether it was him or not is another, untold story) and died of a drug overdose in 1979 after his release on bail.

In January 1978, Rotten left the band sometime after Russ Meyer and Roger Ebert gave up trying to film a Hard Day's Night-esque Pistols film called Who Killed Bambi? and directly after a famously disastrous US tour which ended with him being stranded in the United States by McLaren. He reverted back to his birth name of John Lydon and formed art rock band Public Image Ltd. (or simply PiL) as a means to explore his love of genres such as dub, Progressive Rock and noise music, which he had to keep on the low-down during his Pistols days because these were the kinds of "pretentious" genres that the Pistols were allegedly supposed to be killing off. Over the course of the next decade and eight albums, PiL became an influential pioneer in the genres of Post-Punk and Alternative Rock.

After Lydon left, the Pistols attempted to continue on. One single was released in June 1978, with infamous train robber Ronnie Biggs taking over for Lydon on vocals (as a publicity stunt). After that single and the soundtrack to the then unreleased film The Great Rock 'n' Roll Swindle (eventually released in 1980), the band was essentially over by the time of Nancy Spungen's death in October 1978.

After the Pistols split, Cook became a session musician and Jones made a few solo albums before becoming a radio personality in Los Angeles. McLaren also moved on to other projects, first managing Adam and the Ants and then Bow Wow Wow. He also became a musical trendsetter in his own right with his solo album Duck Rock and the classic single "Buffalo Gals

", both of which are fondly remembered and helped introduce Hip-Hop to the United Kingdom.

The band's original Lydon/Jones/Matlock/Cook line-up reunited for a tour in 1996. They reunited once more for a series of dates in 2002 and 2003. In 2007, they reunited once more for a few more shows (and to re-record "Anarchy in the UK" for Guitar Hero III). They were put on hiatus in 2008 so Lydon could restart PiL, and the Pistols have abandoned the latest of several attempts to record their second album. Matlock has also become the bassist of the Faces. Malcolm McLaren died in early 2010, and by that time Lydon and McLaren had at least patched up enough things for Lydon to recall him fondly in interviews leading up to McLaren's funeral.