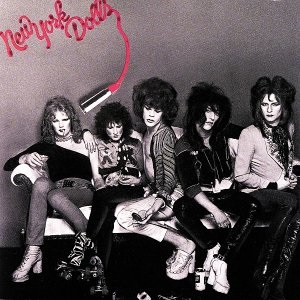 The New York Dolls are a landmark Glam Rock band from, well, New York City, and are a major influence on Punk Rock, New Wave and Alternative Rock, especially bands such as The Ramones, Blondie, Television, and The Smiths. Their look was also a major inspiration for Hair Metal.

Founded in 1971, New York Dolls are Sex, Drugs and Rock & Roll incarnate, and three of the original five members had to pay for it. Led by singer David Johansen, they were dismissed by audiences due to crossdressing, and their The Rolling Stones-esque Protopunk landed them in the punk hall of shame.

Today they are re-formed, although three of the members have died. They've averted The Band Minus the Face, since Johansen is still alive.

During The '80s, as the ex-Dolls pursued solo careers and their mystique continued to grow, several semi-official collections of demos and live tapes were released by a variety of small labels. Most of these had alternate versions of songs from the original albums, but some (notably Red Patent Leather and Seven Day Weekend) had previously unreleased Cover Versions. The most interesting of these might be Actress: Birth of the New York Dolls, an album's worth of otherwise unavailable originals by Actress, an early version of the band.

These are the albums the Dolls have released since their reunion in 2004.

The following tropes are looking for a kiss: