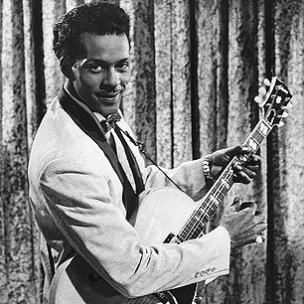 Chuck Berry in the 1950s.
If you tried to give rock and roll another name, you might call it 'Chuck Berry.'
— John Lennon
Advertisement:

Charles Edward Anderson "Chuck" Berry (October 18, 1926 – March 18, 2017) was an American Rock & Roll guitarist, singer and songwriter best known for his string of pioneering hit singles during The '50s. Indisputably one of the most important and influential performers of all time, his best known songs include "Roll Over Beethoven", "Maybellene", and especially "Johnny B. Goode", which had the honor of being sent into space on the Voyager Golden Records in 1977. It's generally considered that if it weren't for the racism at the time of his fame, Berry would have been crowned "King Of Rock And Roll" instead of Elvis Presley by a vast majority.

Although his output slowed after a run-in with the law which saw him convicted for some time (in circumstances similar to those that wrecked the career of Jerry Lee Lewis) and his hit-making period was over by the mid 1960s (with the exception of his only number-one hit, 1972's "My Ding-A-Ling"), Berry's influence on subsequent performers was significant. He was widely covered and cited as major influence by many British Invasion bands, such as The Animals, The Beatles, The Hollies, The Kinks, The Pretty Things, The Rolling Stones and The Yardbirds.

Like his contemporaries Little Richard and Jerry Lee Lewis, Berry remained fairly active over the past sixty years. On his 90th birthday in 2016, he announced that he was working on new songs for the first time since 1979, after decades of insisting he was too old to put out any more work. He thankfully managed to finish recording one final album before his death in March of the following year.

Rolling Stone recognizes him as the seventh greatest guitarist of all time on their list of 100 Greatest Guitarists of All Time.

"Let me hear some of that trope and roll music, any old time you choose it":